Lqqk Studio in Bushwick — called upon by Dover Street Market and Tom Sachs — has spun a creative network of artists, designers and musicians. 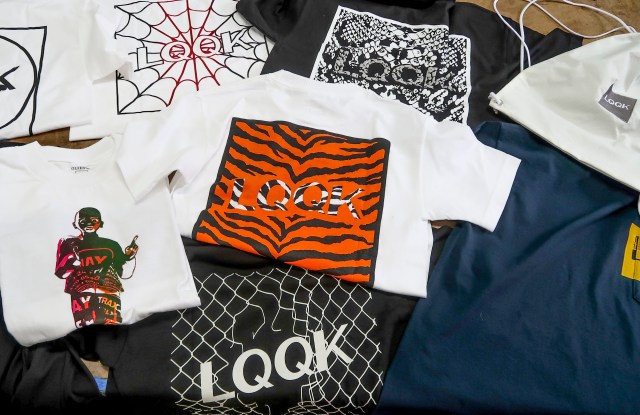 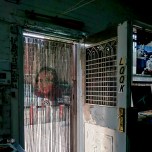 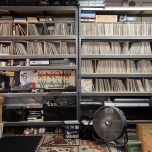 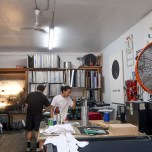 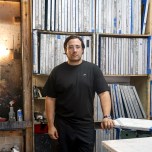 Alex Dondero is dazed and bewildered. The founder of Lqqk Studio — better accustomed to Brooklyn chill — has spent the past 12 hours displaced in Midtown, Manhattan. His print shop has temporarily taken up residence at a high-profile fashion brand based in the Garment District prepping and printing runway samples in the weeks leading up to New York Fashion Week. He phones in at 11 p.m. on the drive home to Bedford-Stuyvesant, remarking, somewhat trancelike, between tollbooths.

This Midtown studio residency — for which Dondero has signed a nondisclosure — is just the latest notch in Lqqk’s ascent. A commercial printing studio, Lqqk (pronounced: “Look”) also produces its own label known for handprinted T-shirts, hats, knapsacks and patterned outerwear that typically sell out within 48 hours of release.

The past year has seen Lqqk lend its distinctly minimal, off-kilter aesthetic to a suite of new partners. The studio has collaborated with Japanese men’s wear brand N. Hoolywood, opened new wholesale channels and devised a sneaker and apparel collaboration with Vans’ tier-one label, Vault, due this spring.

Commercial jobs are but a spoke in Dondero’s wheel. As such, Dondero has used the studio to spin a creative web and establish a Lqqk network — a crew of artists, technician and print collaborators who orbit his particular culture of music, art and design.

“In New York it’s just so important to have your creative network and make sure you’re always paying it forward. Everyone has to be compensated in order to just live in N.Y., because nothing comes cheap,” he said.

“I think the fact that there is so much commerce here, that as soon as someone gets in the door of a place that pays well, it’s an opportunity to elevate someone else to a higher level. It’s important to make sure that you share it. If you’re not keeping your circle of people in that loop, then you are potentially just making life that much harder for yourself.”

Earlier that week, at the studio’s home on Manhattan Avenue in Bushwick, Dondero’s close associate Kevin Emerson, print and design principal Toya Horiuchi, and deputy Joe Garvey are fervently packing printing screens for the Midtown transplant. Resembling a Tokyo beatnik club, the ground floor studio — with its Ottoman rugs and mismatched furniture — is the location for sweaty, impromptu dance parties and DJ sets, the plans for which are often only communicated by text.

Dondero maneuvers through the space’s industrial equipment, making a pit stop at its turntable. His expansive record collection is the basis for Lqqk’s biweekly dispatch on Know Wave radio — the music pet project for gallerist Aaron Bondaroff, cofounder of the Los Angeles gallery Moran Bondaroff.

In 2011, after studying printmaking at the Maryland Institute College of Art, Dondero moved to New York and founded Lqqk as a “fluid” exercise in experimental screen printing, branding, music curation and community-building. In the six years since, the business has helped spark an indie T-shirt ecosystem in New York City.

To all our friends in Japan, @supplytokyo just got a new shipment of all our Auto Body tee's which are available in store.

🥇remember the twins from the shining?? well this they now how old u fEEl?!?!👯💥🤼‍♂️ summer mini cny stuff on da site 🥇

Lqqk’s own product releases, dropped at Dondero’s whim, aren’t predicated on commercial success, a freedom he attributes to cash flow from commercial printing clients. While Lqqk’s aim is to release something new each month, “we don’t beat ourselves up about it,” he said. Print runs are typically capped at 250 units, and product tends to sell out within two days. Product is typically priced from $36 for a T-shirt to around $80 for a thermochromic knapsack.

“We don’t make a lot, we make things so they don’t sit around,” he said, while noting that company revenue is near-evenly split between print jobs and its own brand’s sales. Half of Lqqk brand sales come through Asia, particularly in Japan where it has a strong following. This season, Lqqk is experimenting with new wholesale accounts as it focuses on its North American presence.

“I think we are in a unique position, in that we don’t solely depend on the brand. We are still operating a functioning commercial print shop, and I think the two balance each other really well. It doesn’t create this weird pressure for us to feel like we have to be making more product. I want the brand to grow but I don’t want to become financially stressed out about creating a full-line fashion line. I’d rather just make one really amazing item than 20 mediocre items that show up at a thrift store next season,” Dondero quipped.

Lqqk printers pack up the studio for its Midtown residency.  WWD

Sachs said of his relationship with Dondero: “Alex is a baller. He has a true can-do attitude. We started with the Ten Bullets T-shirts, and he still prints those for us. But then when we asked him to do some f——up overprinting (where the screen goes off the back of the shirt onto the sleeve) to accentuate the errors in the process, that’s when I knew I found someone I could relate to. That’s what we did on the super-successful James Brown Montreal Canadiens shirt.

“Perhaps more meaningfully, Alex really bailed us out in 2012 at the Park Avenue Armory. We were attempting to stencil 500 NASA logos into 500 white Samsonite chairs. We were making a mess and it looked like s—. I did not believe Alex when he said he could print onto the curved plastic seat backs, but he somehow did it. We use those chairs today. Lqqk also did the McMaster-Carr bronze [catalogue sculpture] silk screen, which is a true fine art job.  My affinity with Alex is that it doesn’t matter to him if it’s a T-shirt or a precious bronze. It always the same attention to detail.”

When combined, Lqqk’s merchandise and that of its more niche printing clients comprise a considerable portion of Dover Street Market New York’s mezzanine — the terrace above Rose Bakery devoted to emerging T-shirt brands. In January 2016, the brand was invited by DSMNY to stage a retail pop-up. True to its all-for-one-and-one-for-all epitaph, Lqqk invited friends such as Auto Body to create product as well.

Auto Body cofounder Johnny Knapp noted: “They are not only printing shirts for other people, they’re making their own stuff as well. It ties you into the fabric of New York City, the community of people doing creative stuff. We are all going to the same place and getting shirts from the same person, and everyone’s stuff is looking interesting and different. It’s all about community. And that’s what’s important for Auto Body, foremost.” This summer, Auto Body collaborated with the Parrish Art Museum for its annual Parrish Road Show installation series. At its opening, the group sold Auto Body merch, printed by Lqqk Studio.

Knapp added of Lqqk’s resonance: “They’ve set a nice foundation within the community as the go-to for T-shirts. They’re right off Manhattan Avenue in Bushwick, you can go see them print the T-shirts right there and know it’s hands-on. We all know how precious that is in this day and age, getting a hand-printed shirt, and to feel like you are spending money with a good feeling, that it is going to support a friend’s business,” added Knapp.

Dondero said: “The thing about people like Auto Body, they are genuine participants in the culture of New York. They’re genuinely interested in art and creating social gatherings and social consciousness. So of course we will work with them, even if they only need one shirt. They are part of this larger picture that I feel like I’ve always gravitated toward — being part of an authentic culture that gives back and sustains itself.”