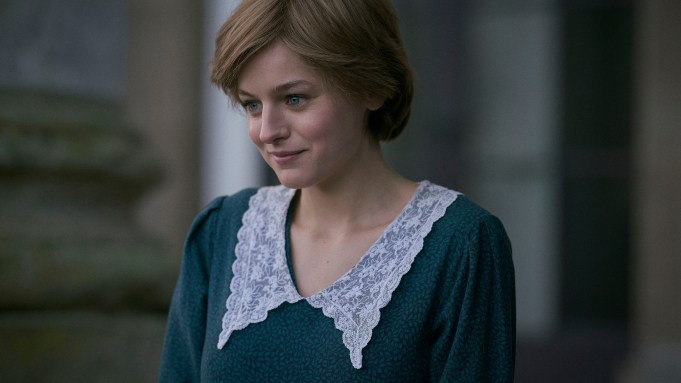 For the last three seasons, fans of Netflix’s “The Crown” have been drawn to the hit royal drama for its exaggerated re-creation of life in the British royal family, including the lavish period costumes that take inspiration from the actual wardrobes of Queen Elizabeth II and Princess Margaret.

Now with season four hitting the streaming service on Nov. 15, all eyes are turning to newcomer Emma Corrin, who is taking on the highly anticipated role of Princess Diana. The introduction of Princess Diana comes with an added emphasis on the show’s costumes, as the princess quickly became a fashion icon once she married Prince Charles in 1981.

“The Crown” costume designer, Amy Roberts, spoke about creating Princess Diana’s wardrobe for the show during a panel discussion for the Brooklyn Museum, which is hosting a virtual “The Queen and the Crown” exhibit that showcases some of the costumes from the show’s fourth season.

“What I think is fantastic about ‘The Crown’ is the journey of Diana from this kind of girl that’s not particularly fashion[able] and she’s shy, wearing these bobbly jumpers,” Roberts said. “It was so amazing to go from that and take her into this fantastic, streamlined, extraordinary woman.”

Roberts looked to Princess Diana’s actual wardrobe for the show, re-creating several standout pieces from the beginning of her relationship with Prince Charles. For instance, the show follows the prince and princess on their royal tour of Australia in 1983 where Corrin’s Princess Diana is seen wearing a pink silk floral jacket and white blouse and a pink and gold silk draped dress, two pieces identical to those the princess wore.

The costume designer also put an emphasis on the characters’ color palettes to show the stark difference between Queen Elizabeth II, who wore darker and muted colors, and Princess Diana, who was often seen in bright and colorful hues.

“With season four, we’re introducing everybody into the Eighties and also each character, like Princess Margaret and Queen Elizabeth, are in a different place now,” Roberts said. “The queen we felt was steadier. She kind of settled into her role as mother to her four children. With the marriage, [Queen Elizabeth and Prince Philip] found a way of making that marriage work and she had settled into being the queen, a monarch. I felt we needed to make her more earthed, so gone were those playful colors.”

“It was always going to be the elephant in the room, that dress,” she said. “And rather than be kind of overwhelmed by it, I thought the best way was for me to shut my eyes and think, what do I remember about that dress?”

Roberts met with David Emanuel to talk extensively about the original sketches and design before the season began filming. Roberts described Emanuel as “amazing and generous” during the meeting and stated that he “wasn’t precious about it,” telling her to “just get on with” designing the dress instead of trying to replicate every precise detail.

“We just had to be true to the spirit of that dress,” Roberts said. “I don’t think my job particularly was to get every detail copied, like every piece of beading or pearl. It was just to give you a big impression of it, that kind of amazing moment really when she came out. That’s what I think we tried to do and not get all knotted up into the fear of it because it’s one of the most famous dresses, isn’t it? If you worry about it, you’re never going to leave the front door, so we just did it.”

Click through the above gallery to see more of Princess Diana’s costumes in season four of “The Crown.”

7 TV Shows to Binge-Watch This November