She wore a Jenny Packham ensemble for the service at Westminster Abbey. 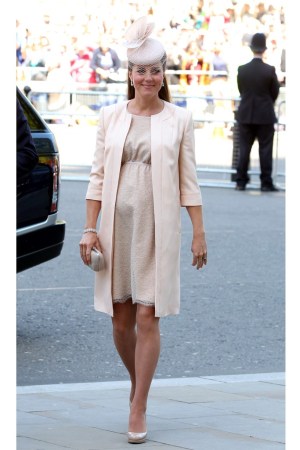 JUST PEACHY: The Duchess of Cambridge joined other members of the British Royal Family at Westminster Abbey for a service to celebrate the 60th anniversary of Queen Elizabeth II’s coronation. The duchess, who is due to give birth in mid-July, wore a peach-colored dress and coat by Jenny Packham, and a matching hat by Jane Taylor.

For the first time since the coronation 60 years ago, the Saint Edward’s Crown — the heavy, solid gold crown encrusted with 444 precious stones with which the Queen was crowned — left the Tower of London to sit on the high altar in the abbey. The Ampulla, the gold, eagle-shaped bottle from which the sacred holy oil was poured for the anointing, also stood on the altar.

Meanwhile, Prince Harry received his own glass Coronation goblet from 1953 as he unveiled a new walkway plaque celebrating the wedding of the Duke and Duchess of Cambridge. The black and silver panel, which depicts a scene from the 2011 nuptials at Westminster Abbey, is a part of the Jubilee Walkway commemorating the Queen’s Silver Jubilee, 25 years as monarch, and also the Jubilee Greenway, which celebrates HRH’s Diamond Jubilee — 60 years on the throne.