The Eighties Usher in Conspicuous Consumption for Fashion and Beyond

Along with wide shoulders, big poufy dresses, bold-colored gowns and the onset of MTV, fashion trends were fast and furious until the Stock Market and the Iron Curtain came crashing down toward the end of the decade. 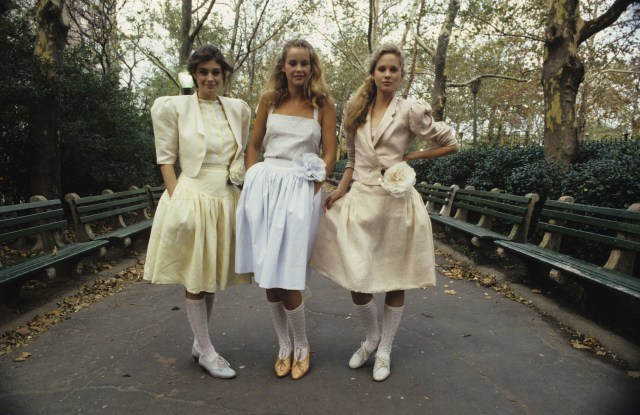 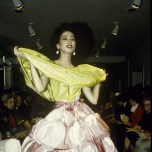 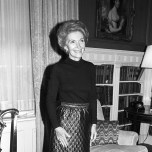 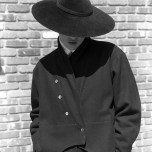 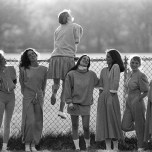 Like just about everything else in the Eighties, fashion was as big as the high-rolling times — wide shoulders, plenty of pouf and “Working Girl”-worthy hair. Conspicuous consumption was the m.o. Limos were the preferred transportation for Wall Street titans as they sped their way to black tie events. Then real estate developer Donald Trump first emerged on the New York scene with the help of his glamour-loving first wife Ivana. Entertaining returned to the White House thanks to Hollywood actor-turned-Commander in Chief Ronald Reagan and his Adolfo-loving stylish wife Nancy.

The triumvirate of Ralph Lauren, Donna Karan and Calvin Klein turned themselves into household names. And a newcomer on the scene Tommy Hilfiger did his part to introduce the world to an All American, red, white and blue style. Strong shoulders and shapes were squared away with proponents like Mugler and Montana. LBO king Henry Kravis and his wife at the time Carolyn Roehm, a designer and quintessential hostess in her own right, epitomized what WWD defined as “Nouvelle Society.” Along with Nancy Reagan red, clothes horses favored other bold colors. Designers like Yves Saint Laurent, Valentino, Christian Lacroix and Arnold Scaasi delivered that and more with fancy flounces and strapless gowns.

Even more momentous was the Royal Wedding of Lady Diana Spencer to Prince Charles. The extravagant gown David and Elizabeth Emanuel designed for Princess Di wound up being one of the most copied dresses over the next few years. Fashion also hit the small screen in a big way with the 1981 launch of MTV. Marc Jacobs summed up the zeitgeist, “Sex sells music, and it sells clothes.” While Michael Jackson’s street smart Versace looks were copied by thousands of teenagers, Stevie Nicks’ “Gypsy” flowing dresses and Cyndi Lauper’s flowery “Girls Just Want to Have Fun” styles were also quickly adopted by fans. Boy George and Annie Lennox broke down sexual stereotypes. And Seattle introduced the world to grunge.

And before the Stock Market came crashing down on Black Monday in October 1987, skirts lengths went up with miniskirts taking the country by storm. While Wall street was dealing with high-profile bankruptcies and mergers, the fashion industry was struck with its own crisis — the devastation of AIDS.