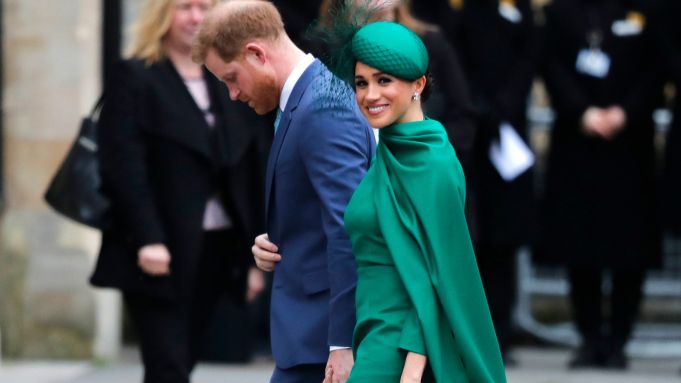 LONDON — Prince Harry and Meghan Markle will bid adieu to their royal duties this week with a final series of visits before they officially withdraw as working members of the royal family. Their final tour will run from Thursday, March 5 through Monday, March 9, with all events taking place in London.

On Thursday evening, press and fans alike were eager to get a glimpse of Markle making a reappearance in the U.K., and she didn’t disappoint. The Duchess stepped out in a bright blue midi dress by Victoria Beckham paired with navy blue pumps with Prince Harry wearing a navy blue suit to match. The couple attended the Endeavour Fund Awards, which celebrates the achievements of wounded soldiers and have gone on to take part in sporting and adventurous challenges, at Mansion House in the City of London.

It’s not exactly a grueling schedule, with the couple set to undertake one engagement per day. The couple have left their infant son, Archie Harrison Mountbatten-Windsor, at home in Canada and there is even speculation — fueled mainly by the bookies — that the couple will announce that Megan is pregnant once again.

Harry, as he wants to be called now, is already in London: Last week, he hosted an eco-friendly travel summit for his Travalyst initiative. A few days later he joined Jon Bon Jovi and the Invictus Games Choir at Abbey Road Studios. They recorded the charity song, “Unbroken.”

On Friday, Harry will attend the opening of the Silverstone U.K. Experience, a new racing museum, with Lewis Hamilton.

Over the weekend, the couple will be at Royal Albert Hall for the Mountbatten Festival of Music Festival in aid of The Royal Marines Charity, while on Sunday, Markle will participate in an event for International Women’s Day.

On Monday, March 9, the couple will join members of the royal family at the Commonwealth Day service at Westminster Abbey. Since the new year, the couple has been on an extended break, having announced in January that they wanted to take a step back from royal duties and renounced their HRH titles as they aim to support themselves in the future. Queen Elizabeth has left the door open for the couple to return to England, and to their duties, should they want to.

This last royal tour for the foreseeable future will undoubtedly attract many eyes.

“The media will be out in force, and people will be interested in knowing what the dynamics are, and every gesture and every look will be examined,” said Hugo Vickers, the British author and broadcaster.

Speculation has been rife about the couple’s future — and motivations — ever since they announced their decision to step back and leave the country. Media outlets and members of the public all have an opinion about the issue and many are playing the blame game.

Markle in particular has been under attack, painted as a villainous and manipulative character. Others have accused her of playing the victim, especially after the royal pair appeared in an ITV documentary late last year. During that interview she spoke frankly about her struggle with the press.

Both Harry and Meghan are suing media organizations in the U.K. She has filed a claim against Associated Newspapers over the misuse of private information, infringement of copyright and breach of the U.K.’s Data Protection Act, relating to the alleged unlawful publication of a private letter in Britain’s Mail on Sunday.

He is taking action against The Mirror, The Sun and the News of the World (which is no longer published) for alleged phone-hacking. At the time the suits were filed last October, Harry complained bitterly about the ongoing harassment of him and his wife by the British press.

While Megxit, as the split is known, hasn’t been a boon for the royal family brand, it has drawn attention away from Prince Andrew, who allegedly committed sexual offenses with minors while spending time with the convicted sex offender Jeffrey Epstein.

So powerful has the Megxit story been that it has nearly eclipsed the Andrew scandal: Despite an in-depth documentary, a (disastrous) follow-up interview that ended in the prince stepping back from royal duties, that story seems to have disappeared.

Indeed, he won’t be attending Monday’s Commonwealth Day service, which will only intensify the spotlight on those soon-to-be members of the public, Harry and Meghan.

Megxit Explained: Why the Sussexes Are Stepping Away From Their Royal Duties

A Timeline of Harry and Meghan: From the Royal Wedding to Megxit