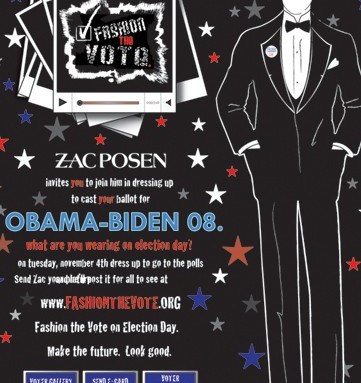 THE FUTURE LOOKS GOOD: Voting has never been more fashionable — especially if Zac Posen has his way. On Thursday morning, Posen filmed a 15-second video urging people to vote, to vote for Barack Obama, and to dress for the occasion. The video — featuring the designer wearing lots of Obama pins made by his studio — can now been seen on fashionthevote.org. Visitors to the site can also send Posen photos of themselves in their election day look, which will be posted on the site. “I am doing this because I want to make a difference, and I want to encourage people to get to the voting, vote for Obama, and have fun and look good doing it,” Posen said. “I think it’s such an important day in our country’s history. It’s about people expressing their individuality.” Asked whether he had any fashion advice for the big day, Posen had this to say: “I think blue obviously is the color of choice, and red is a good accent color.”

DIFFERENT ROLE: Roberto Cavalli will fill different shoes for one night. The flamboyant designer will serve as godfather at the UNESCO gala dinner that will take place in Cologne, Germany, on Saturday night. UNESCO chose Cavalli for his continuous commitment in supporting humanitarian causes and he follows in the footsteps of the Dalai Lama, Queen Noor of Jordan, Helen Mirren, Placido Domingo and Bianca Jagger. The proceeds of an auction that will take place that evening will support a special program called “Education for Children in Need,” aimed at supporting primary schooling for street children in poorer countries.

TOM WATCH: No, Tom Ford will not be costuming his own film. Sources say Arianne Phillips, of stylist-to-Madonna and Oscar-nominee (for “Walk the Line”) fame, has been enlisted to design costumes for “A Single Man,” Ford’s directorial debut set to start shooting Monday in Los Angeles.

TREND HOUNDS: Chalk it up to synchronicity or a Scottish conspiracy, but a gaggle of houndstooth-bedecked students from Kent State University received more than a few stares from WWD editors when they were spotted in the 750 Third Avenue office lobby Thursday afternoon. The six fashion merchandising majors — Krystle Formosa, Catherine Colitre, Kenzie Kraft, Ashlee Kerner, Brittany Tompkins and Tiarra Smallwood — were visiting WWD on a department-sponsored trip and insisted their coordinating outfits were not the result of planning. Their bold printed coats came from such varied labels as Rocawear, Bitten by Sarah Jessica Parker, The Wet Seal, Express and Cejon.

KORS’ CAMPAIGN SWING: “I’ve autographed handbags before, but the only other dress I’ve autographed was for Janet Jackson,” said Michael Kors, Sharpie in hand, as he signed the python strap on a jersey dress worn by Hassie Harrison, great-grandaughter of the late oilman H.L. Hunt. Kors’ signature was in demand Wednesday afternoon at Neiman Marcus in Dallas’ NorthPark Center after he narrated an informal show of spring looks. Harrison selected a bright yellow and white polkadot sheath dress, while Heidi Dillon, founder of a nonprofit called The Fashionistas that is trying to establish a fashion museum in Dallas, ordered two black dresses and a black and cream polkadot silk shantung coat. For instant gratification, Dillon took home Kors’ $13,000 gray mink belted cocoon vest.

“Leave it to Michael to take everyone out of the doldrums,” said Dillon, who was calculating how to finance the fur. “Everyone is bleeding money, so we’ve got to get creative. I’ve got 15 furs, and I think I’ll take some of them to resale shops.”

ON A JET PLANE: Samsonite Black Label unveiled its collection by Victor & Rolf Thursday in Madrid at its annual House of Samsonite runway show and party. Inspired by the jet-set years of the Fifties, the duo’s designs for Samsonite Black Label feature a playful vintage airplane print or a classic black style and include an entire travel collection of spinners, totes, and laptop and cosmetic cases that hit Samsonite stores this spring. “We want to celebrate the world as the world of your dreams, our message is aimed at everybody who is attracted to this dream world,” said Viktor Horsting and Rolf Snoeren. “We believe in ambivalence, in glamour, in hope and in beauty.”

ON THE WRIST: Sergio Rossi is extending its product offer with its first bracelets for spring. The pieces are coordinated to the brand’s core collection of handbags and shoes and come in brass covered by precious hides such as crocodile or python skin painted and embroidered by hand. Also, the company has asked French writer Marie Desplechin to pen a short story to go with limited edition python boots in a tobacco hue available this winter in the Paris, London and Brussels boutiques only. The story, “Fine, high, tapered,” centers on a woman’s choice between a pair of old Sergio Rossi boots and her long-standing, drawn-out relationship. Guess who has to go.