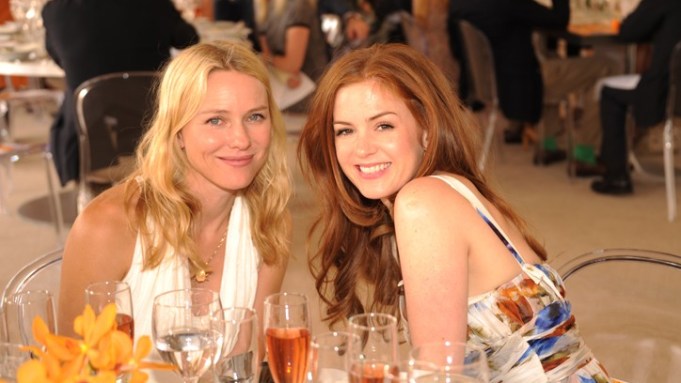 It was a family affair at the fourth annual Veuve Clicquot Polo Classic on Governor’s Island in New York. Famed heartthrob-on-horseback and renowned family man Nacho Figueras was rarely without young son Artemio on his hip or arm-in-arm with wife Delfina Blaquier, whose dress and Veuve-Clicquot-orange straw hat were gifts from fellow host and friend Marc Jacobs.

“I look forward to this day all year long,” Figueras said with a grin. “It’s a great day, because hopefully thousands of New Yorkers will enjoy polo as much as I do, and learn to love it, and have an amazing day for this great cause.”

Well-dressed children abounded, racing around and through the legs of spectators like Andre Balasz, Dani Stahl, Julianna Marguiles, Sanaa Lathan, Alek Wek, Jeff Halmos, Lisa Mayock and Lorenzo Martone. Littler guests were eventually herded off to their own section of the VIP marquee, which offered fare better-suited for young appetites (grilled cheese, penne with tomato sauce) and activities (foam crowns to glue paste jewels on) intended to keep tots safely out of the way of stampeding ponies, or the perhaps the more real danger of the scrum of overserved flashbulb-seekers in too-high espadrille wedges.

Upon their arrival to the island, VIP ticket holders were whisked away on either a white or red trolley to their designated marquee for Champagne, hors d’oeuvres and a variety of well-placed lawn furniture. Non-ticket holders took off on foot to try and mark out some space on bleachers or grass for pre-purchased picnics or on-site offered BBQ on the far side of the field. The three course lunch in the VIP marquee began with caviar, which reminded new parents Andres and Lauren Santo Domingo of their seven-week-old son.

“The only thing I really, really craved during my pregnancy was caviar,” Santo Domingo said, daintily separating it with her fork from the fennel infused crème-fraîche custard below. “I was Googling it constantly to see if it was something that, you know, you shouldn’t eat. Somehow, there were more people Googling ‘crack while pregnant’ than ‘caviar’ on most Web sites… But I asked Dasha [Zhukova], seeing as she’s Russian and a great mother, and she said it was OK.”

As is tradition, halfway through the match spectators took to the fields to stomp the divots. Rope wielding uniformed attendants spread across the field and created a makeshift perimeter. Attendees on the other non-VIP side of the rope jostled and pointed at boldfaced names with occasional whoops of recognition: Naomi Watts, Whitney Port, Shenae Grimes, Erin Fetherston, Isla Fisher, Amber Heard and Kathy Griffin were all traipsing around the field, within eyeshot of the crowds.

“This is my first polo match,” Griffin explained, “I was just excited to be on a ferry. I’ve seen them before, but that was the first time I’ve been on one. I like Governor’s Island. It looks like an insane asylum. I might check myself in.”

The event’s beneficiary was Hope Help and Rebuild Haiti, an initiative of Urban Zen, Donna Karan’s foundation. Karan was one of the hosts, along with Figueras and Jacobs, and was on hand in a very large straw hat and papier-mâché handbag crafted by Haitians, “out of tobacco leaves,” she explained.

“People only see the negative things about Haiti,” Karan continued. “I want them to see the good things, too. I think there’s a great and beautiful future there.”

Wyclef Jean was inclined to agree, taking to the mic halfway through the luncheon to congratulate guests on the opportunity to hear him freestyle.

“If you don’t know who I am, you might want to Google me,” Jean crowed, directing someone nearby to, “get out of the way, let everyone see the superstar.”

The rapper then launched into a labored version of “Hips Don’t Lie” over a backing track.

“I just got a BBM from the President of Haiti,” Jean said, interrupting himself. “He thanks everyone and invites you all to come visit. And no, I will not give you his BBM. It is encrypted just like Obama’s. Stop asking. Now we need some women to dance up front, here.”

Karan and a few guests complied, shimmying around Jacobs’ table, where he continued to eat his lunch, completely unruffled by the scene around him.

“Polo’s not something I know much about,” Jacobs had explained earlier in the day. “I went to my first match two years ago. It’s my friendship with Nacho and Delfina that really got me involved. But I enjoy new things.”