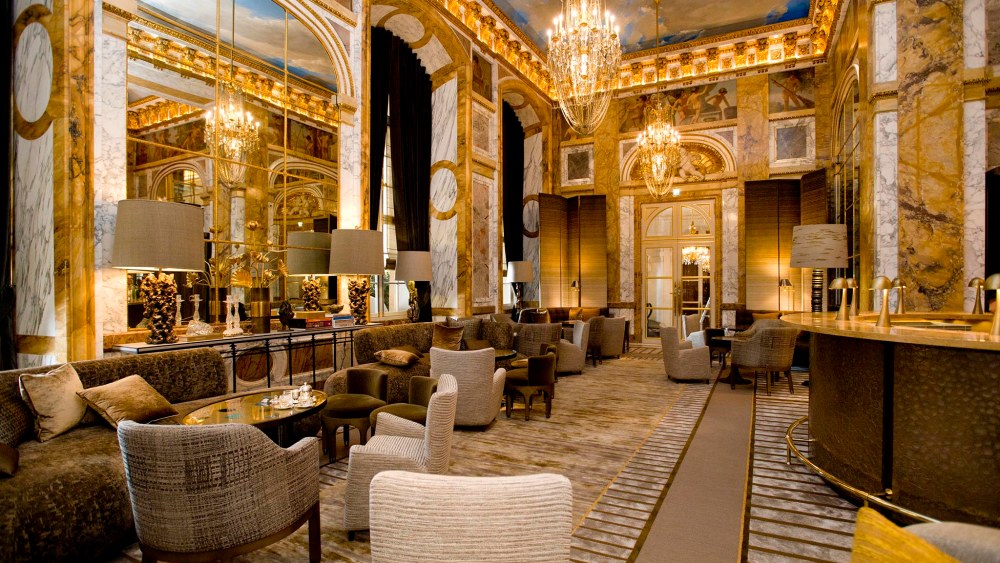 The Hôtel de Crillon, one of the crown jewels of Paris’ historic luxury hotels, is reopening its doors after a four-year renovation.

The gates of 10 Place de la Concorde will swing open on Wednesday to reveal the Crillon’s refurbished 81 rooms, 33 suites and 10 Signature Suites, a gastronomic restaurant, a brasserie, a bar and winter garden, a spa, hair salon and grooming spaces.

Highly anticipated is the all-new swimming pool — a skylight in one of the interior courtyards will bring natural light onto the 17,600 fish-scale mosaic tesserae lining the basin.

Extensive work was done by the renovation arm of building conglomerate Bouygues to reinforce the structure and carve out new spaces both in the upper levels and below ground. All the hotel’s listed elements — which include the façade, parquet flooring as well as the Batailles, Aigles and Marie Antoinette reception rooms — have been meticulously restored. Surprising elements came to light during the renovation, such as the structure of a chapel that had been hidden by previous works. Some 17,000 cubic meters of earth were removed to excavate the subterranean levels required for the pool and new technical equipment.

As announced, Karl Lagerfeld did the decor of the Grands Appartements, a set of two suites and a room overlooking the Place de la Concorde. Expect majestic views, hand-finished wood panels, Baccarat chandeliers, some of the veteran designer’s favorite books, a walk-in wardrobe and sumptuous marble bathrooms featuring products from L’Officine Universelle Buly. One of the rooms in the ensemble is a witty nod to Choupette, his famous feline, featuring wallpaper and carpeting in jagged vertical lines mimicking fabric rent by cat claws. Framed shots by Lagerfeld are also seen throughout.

Architect Richard Martinet oversaw the renovation with interiors by decorators Chahan Minassian, Cyril Vergniol, Tristan Auer and Paris-based firm Culture in Architecture under the artistic direction of Franco-Lebanese architect Aline d’Amman. Spaces have also been redistributed, with a chic bar now occupying the Concorde-facing rooms once home to the Michelin-starred restaurant Les Ambassadeurs.

The renovation also involved 147 Métiers d’Art craftsmen in the rehabilitation of the non-listed areas. Guests can expect 40 different hues and types of marble, armchairs upholstered with eel leather and bronze coffee tables created by designer Anasthasia Millot, as well as artwork in public spaces and the rooms.

Food enthusiasts will look forward to the return of chef Christophe Hache, who previously helmed Les Ambassadeurs. He will oversee the gastronomic identity of the hotel and head its new restaurant L’Ecrin. His right hand man, Justin Schmitt, will officiate in the Brasserie d’Aumont, while sweet delicacies and pastries will be the work of Jérôme Chaucesse.

While it is a firm part of the City of Light’s history, the hotel, part of the Rosewood group that also owns The Carlyle in New York, will definitely focus on today’s clientele and its expectations.

“The Hôtel de Crillon is part of Paris and, in a way, embodies Paris,” says Jacques Oudinot, director of operations, who added they would be pursuing classification as a “Palace,” an exacting French label distinguishing the most upscale hospitality experiences, within the year. “One of our goals is to open the hotel to the local clientele of Parisians. It’s not just about having rooms; it’s about offering restaurants, bars and a certain way of life.”

There will also be two retail spaces of 270 square feet each, which have been turned over to journalist and fashion multi-hyphenate Thomas Erber. Reprising his traveling curio cabinet concept, the “Cabinet de Curiosité de l’Hôtel de Crillon par Thomas Erber” will showcase a wide-ranging selection of products.

“Historically, hotels were platforms for international, global exposure well before these ideas became widespread as only the affluent could travel,” says Erber, noting that he was attracted to the hotel’s desire to break away from the brand concessions model that is prevalent in high-end hospitality. “With the shifts in expectations of the new luxury customer, I wanted to offer a panorama of the new creative scene,” he adds.

Products are grouped in three categories: one-of-a-kind pieces, limited editions and classics. The classics will range from a little black dress by Mugler, to an overnight kit by men’s sportswear brand Ron Dorff, offering products for travelers needing to update their wardrobe on the go. Other pieces will include a clothes valet in precious wood by Atelier Arizona, jewelry by Delfina Delettrez, eyewear from Maison Bonnet and Blyszak, customized iPhones by Adoro as well as exotic skin and Plexiglas clutches by Hugo Matha, who also designed the wardrobe of the hotel’s staff.

Erber’s curio space will showcase a numbered photographer’s print, which will be replaced by an entirely different print once all are sold, to mesh with the hotel’s link to photography.

The spa will feature products by French brands EviDenS de Beauté and Maison Caulières, while men’s grooming will be in the hands of La Barbière de Paris. The hair salon has been turned over to hairdresser David Lucas.

Prices at the new Hôtel de Crillon will start at 1,200 euros a night for a deluxe room with a street or courtyard view.