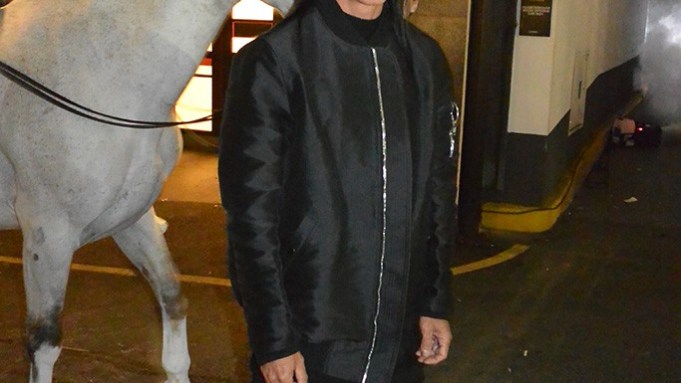 THE LATE SHOW: Rick Owens was very late to the party Selfridges threw for him on Saturday night. The designer, who has collaborated with the department store on a boutique, didn’t make his appearance until after 2 a.m., three hours into the event. “That’s when everybody is all lubed up and getting going, I mean, I like going at the very peak, everybody needs to get warmed up for me first,” he explained.

What was he doing while the likes of Paloma Faith, Edie Campbell, Otis Ferry, Charlie Casely-Hayford and Ozwald Boateng downed stiff gin drinks served by skinny, topless and tattooed models? Watching Lisa Kudrow in episodes of “The Comeback” in bed at Claridge’s.

Two long-haired models, painted white, sat astride grey horses to greet the mostly black-clad guests at the oversubscribed party, where the smoke-filled space was divided by a dramatic barrier of light bars.

Earlier in the day, Owens was at Selfridges signing copies of his eponymous book, a reissue of the 2011 tome by Rizzoli. “I’ve never done this kind of thing, it’s really sweet, I might cry,” he said. “I’m having an internal cuddle with everybody, we’re having a group cuddle, a gang bang.”