The occasion was the Italian screening of scenes from “Scatter My Ashes at Bergdorf’s” as the New York retailer celebrates its 111th anniversary. 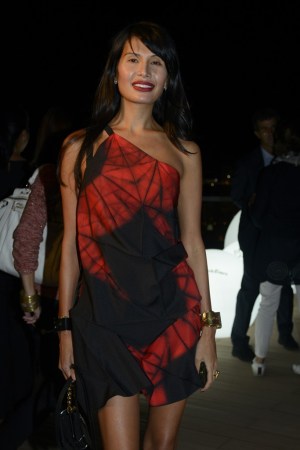 HIGH LIFE: Hardly a typical Milan cocktail scene, fashion folk gathered on the 38th-floor roof deck of the Palazzo Lombardia, a government building, and gazed on the crescent moon glowing over the spire of an even taller building, the nearby Garibaldi Tower. The occasion was the Italian screening of scenes from “Scatter My Ashes at Bergdorf’s” as the New York retailer celebrates its 111th anniversary. The shindig was hosted by Bergdorf president Joshua Schulman and Denise Warren of The New York Times.

Maria Buccellati reminisced about her first purchase at Bergdorf’s. “I was with my mom. I think I was 15, and we went to buy all my face creams,” she recalled. “Now I go with my daughter and my son. My favorite now thing is the organic juice at the jeans bar.”

Some of the revelers moved on to the restaurant Dal Bolognese, where Belstaff hosted a lavish open-air dinner to fete its new Milan boutique in Via della Spiga.While guests feasted on mozzarella, cotoletta and tiramisu, Belstaff’s chief executive Harry Slatkin was so busy conversing with retailers and editors that he hardly had time to make it to the buffet. “I haven’t eaten but I can’t wait,” he said, around 10 p.m. “I plan to take a bowl to my hotel room.”