Secret Service agents have been spotted casing Martha’s Vineyard for what is said to be a late-August two-week getaway for the Obama family. 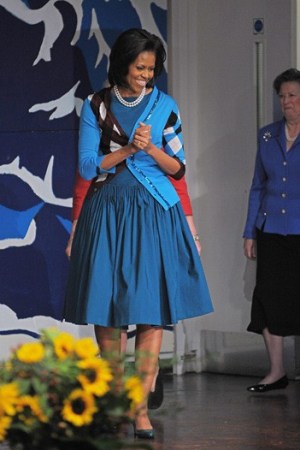 CHOP CHOP: Michelle and Barack Obama are returning from abroad, but apparently their summer vacation will be closer to home. Secret Service agents have been spotted casing Martha’s Vineyard for what is said to be a late-August two-week getaway. The First Family’s destination is believed to be East Chop, the sleepier side of Oak Bluffs. Obama wouldn’t be the first president to hightail it to the Massachusetts isle for some sun ’n’ fun.

Bill Clinton and Hillary Rodham Clinton first joined the summer crowd to get away from the Oval Office. His golfing buddy Vernon Jordan would surely lend an ear or a tee to Obama.

Bill Gates and Warren Buffett are leading members of the island’s brain trust. But should the president need some comic relief, Spike Lee, David Letterman, the Farrelly brothers, Larry David, Bill Murray, Ted Danson and Michael J. Fox are island goers. And surely Jay-Z and Beyoncé Knowles, who were regulars last summer, could help keep the First Family entertained. And the President wouldn’t have to wander far from the golf course or the beach to meet the press. Diane Sawyer, Mike Wallace and Walter Cronkite know the lay of the land.

ART IN MOTION: For her latest collection of wedding gowns, Carolina Herrera channeled inspiration from fashion featured in the work of Edgar Degas, Sandro Botticelli and Franz Xavier Winterhalter. Costume designer William Ivey Long was one of the guests at Herrera’s runway show Sunday at Tiffany & Co.’s Fifth Avenue flagship. “I’m playing hooky from ‘9 to 5’ during our dinner hour. I’m going back to see Dolly Parton now. Our first preview” was Tuesday, he said, adding Lily Tomlin dropped by a recent rehearsal. Long said he approached the late Seventies costumes without any “Dynasty”-type shoulder pads. “There is a lot of body-shaping and color. Remember this is when Diane von Furstenberg broke on the scene,” he said.

Parton has been known to be a scene stealer, but Long described her as “America’s sweetheart….She really is. Today she brought in fudge she had cooked for all of us, and the other day it was cookies.” Apparently the original “9 to 5”-er rustles up such delicacies in her tricked-out RV, which she retreats to once the theater fades to black each night.

GAME FACE: It looks like another New York landmark is getting some runway action. With Mercedes-Benz Fashion Week relocating from Bryant Park to Lincoln Center’s Damrosch Park next year, a newly formed nonprofit charity group, which calls itself the New York Fashion Week Organization, hopes to bring some shows to Madison Square Garden, starting in September. The organization — which is not affiliated with IMG, the producer of Mercedes-Benz Fashion Week — has booked dates between Sept. 8 to 23 at MSG’s Theater venue. Few details were available, but the organization plans to invite designers to participate in a series of consumer fashion shows, where tickets will be sold. All proceeds of ticket sales will benefit Garden of Dreams, a charity that works closely with Madison Square Garden and aims to help children in crisis. The charitable group plans to continue with these charitable shows each season.