The Play’s The Thing… East Meets West and Silver Lining

Théâtre Saint-Georges is staging a comedy version of the Bettencourt affair, called “Parce que je la vole bien” (or “Because I Steal It Well.” ) 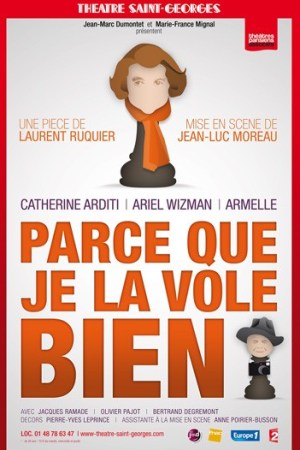 THE PLAY’S THE THING: First it was a family feud, then an affair of State and now — a play. Paris’ Théâtre Saint-Georges is staging a comedy version of the Bettencourt affair, called “Parce que je la vole bien” (or “Because I Steal It Well,” in English), for three months starting Feb. 12. The title is a riff on the L’Oréal Paris tagline — Parce que je le vaux bien (or Because I’m Worth It). Catherine Arditi will act as Madame Caquencourt (a take-off on L’Oréal heiress Liliane Bettencourt). Ariel Wizman — the TV presenter, Grazia columnist and Alber Elbaz pal who deejays for Lanvin fashion shows — is to embody Jean-Florent Servier (aka photographer François-Marie Banier). And Armelle will play Catherine, Madame Caquencourt’s daughter (or Bettencourt’s daughter, Françoise Bettencourt Meyers). The actual Bettencourt affair may have ended suddenly on Dec. 6, but evidently its drama lives on.

WATER WORLD: Dries Van Noten is the latest fashion designer to outfit a ballet. The Antwerp-based designer, a devotee of modern dance, said he has created new costumes for the forthcoming Paris run of “Rain,” by Flemish choreographer Anne Teresa De Keersmaeker. It opens May 25 for 10 performances at Palais Garnier in Paris with a minimalist score by Steve Reich.

SILVER LINING: Fans of Freja Beha Erichsen’s style will soon have access to a line of jewelry designed by the model for the Danish silver house Georg Jensen. Beha stars in the house’s just-released spring ad campaign. “It’s an exciting project. There’s a certain customer that relates to Freja and what she represents,” said Ulrik Garde Due, Georg Jensen’s president and chief executive officer. Featuring gold and silver pieces, the collection will hit the Scandinavian market and the brand’s website in April.

EAST MEETS WEST: Christian Lacroix has combined fashion, anthropology and art for the “Women in Orient,” an exhibition at the Musée du Quai Branly, Paris’s home for the indigenous arts, which opens today and runs through May 15. “I always wanted to curate and now I have the opportunity to do it,” said Lacroix, who also designed the exhibition “Alexandre Cabanel — The Tradition of Beauty” at the Wallraf-Richartz-Museum in Cologne, Germany. “His work is very close to me,” enthused Lacroix, who studied at the Academy of Arts in Montpellier, Cabanel’s hometown.

Lacroix will also be going back to his roots when he prepares to decorate the main church and museum as part of the 2013 celebration of Marseille as a cultural capital. Lacroix is also preparing costumes for the ballet  “La Source” to be performed at the Opera Garnier in Paris in October. Meanwhile, the Quai Branly showcase features 150 items of traditional and ceremonial dress, jewelry and accessories from Jordan, Syria and Palestine. Dating from the 19th-century, pieces were hand selected by Lacroix from the Quai Branly’s own collection, as well as from the private collection of Palestinian collector and textile scholar Widad Kamel Kawar. Dazzling embellished pieces hang above an originally designed oriental carpet that has been installed for the exhibition.