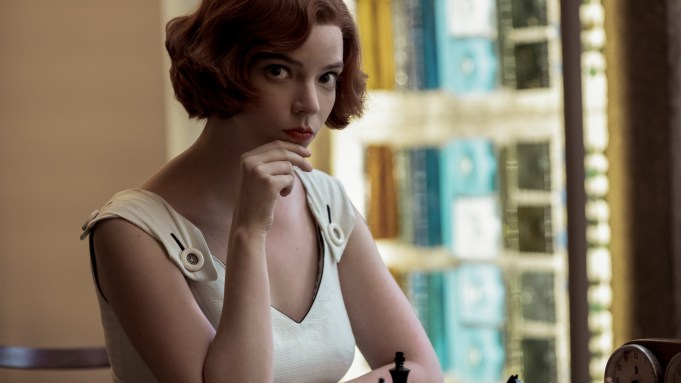 Netflix’s “The Queen’s Gambit” has quickly become a hit, thanks in no small part to the show’s period costumes.

The limited series, which debuted late last month, follows a young orphan, Beth Harmon who is played by Anya Taylor-Joy, on her mission of becoming the world’s greatest chess player in a male-dominated industry. The show is set in the Fifties and Sixties and includes many costumes that pay homage to the Mod style of the era.

For Gabriele Binder, the costume designer behind the show’s looks, focusing on an evocative color palette was the most important part in creating Harmon’s wardrobe. Specifically, Harmon’s wardrobe centered on a light green color, which is seen in her first look when she arrives at an orphanage as a child and in one of her last looks, a collared dress Harmon wears during a chess competition.

Binder talked about the show’s costumes in a panel moderated by Oscar-winning costume designer, Ruth E. Carter, for the Brooklyn Museum, which is currently displaying some costumes from “The Queen’s Gambit” in its virtual exhibit, “The Queen and the Crown.”

“Very early, we had this feeling that this light green could be her color,” Binder said. “We tried to find out what makes her stronger, what makes her weaker and what are the points where maybe the same color gives her power.”

Binder describes the light green hue as Harmon’s “home color,” and explained that she dressed the character in the collared dress for the chess competition to show a full-circle moment where the color “gives her strength.”

As Harmon begins traveling for her chess competitions, Binder explained each location — such as New York City, Paris and Moscow — starts influencing her style.

For example, While Harmon is in Paris, she buys a black and beige dress that was inspired by those popularized by Pierre Cardin in the Sixties. For her final tournament in Moscow, Beth wears a checkered coat that is showier and more sophisticated than her prior outfits. The look is meant to evoke Harmon’s newfound confidence as she gains international recognition.

“Anya, she made it so easy for me because she was so graceful,” Binder said about dressing Taylor-Joy. “The dresses are more or less simple and quite straight. I don’t want to say dry because they are fashionable, but they were not so fashionable that they could stand out as a dress itself. She gave so much grace to it that every costume came out so great.”

Click through the above gallery to see more costumes from Netflix’s “The Queen’s Gambit.”

What to Know About Season Four of Netflix’s “The Crown”