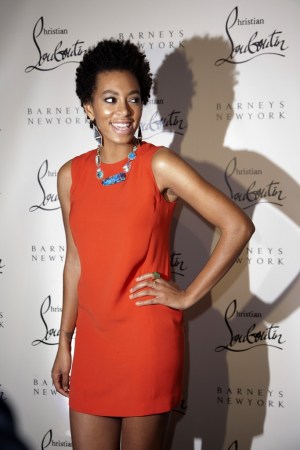 Barneys New York curtained off the second floor of its Beverly Hills outpost Thursday night and moved the racks of designer collections to make room for Christian Louboutin and throngs of ruby-soled admirers, including Rosie Huntington-Whiteley, Dita Von Teese and Lea Michele.

Many of the attendees showed impressive stiletto stamina by standing up to 30-deep in line waiting for the designer to sign copies of his namesake Rizzoli book. Huntington-Whiteley didn’t spend the entire evening on her feet, not that she was against suffering for skyscraper shoes.

“I almost like the pain. You know you are wearing heels,” she said, while taking a break on a sofa. “I like that achy foot feeling at the end of the night, when you can kick them off.”

“We are working on something right now which is the most sexual, fetishistic thigh-high boot anyone has ever seen. It’s a tribute to the art of John Willie,” said Von Teese, who wears Louboutin footwear during her performances.

Shortly before the event wrapped and the almost 5-foot-tall pile of hardcovers was gone, Huntington-Whiteley looked down at her gold-toed heels.