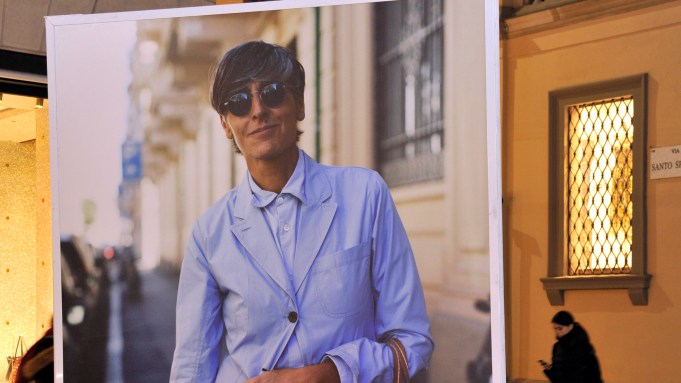 BACK TO THE STREET: Photographer Scott Schuman, aka The Sartorialist, marked the kickoff of Milan Fashion Week with a cocktail on Wednesday night to celebrate an exhibition of his street-style images on one of the world’s most stylish thoroughfares, Via Montenapoleone.

Giant prints of the photographs were dotted across the pavement as part of the joint initiative between the Associazione Montenapoleone, which represents more than 130 luxury brands and property owners in the area, and mobile phone maker Samsung. Schuman clarified that the pictures were not taken on a mobile phone, but rather culled from his archives of the last 10 years.

“It was really about a love letter to Milan, and Samsung was very gracious to underwrite that,” he explained.

The snapper noted that his work resides in the permanent collections of the Victoria & Albert Museum in London and the Tokyo Metropolitan Museum of Photography, but he got a special kick out of seeing it out in the open.

“I started taking pictures and putting them on the Internet to share and have people comment and talk about it and things, so to see them on the street where everyday people can see it, I love,” he enthused.

Guests including shoe designer Giuseppe Zanotti enjoyed potent Absolut vodka cocktails at the party held at the Montenapoleone VIP lounge, set up to host high spenders, in the courtyard of a building designed in 1838 by Luigi Clerichetti.

For those hoping to be captured by The Sartorialist, a word of advice: No conspicuous lingering on street corners, pretending to speak into your phone — or any other of the attention-grabbing tactics frequently employed by street-style wannabes.

“I also am very self-conscious. I’m actually very shy, so when people make me feel like they’re trying to get my attention, I actually end up doing the opposite. It makes me nervous,” he confessed.