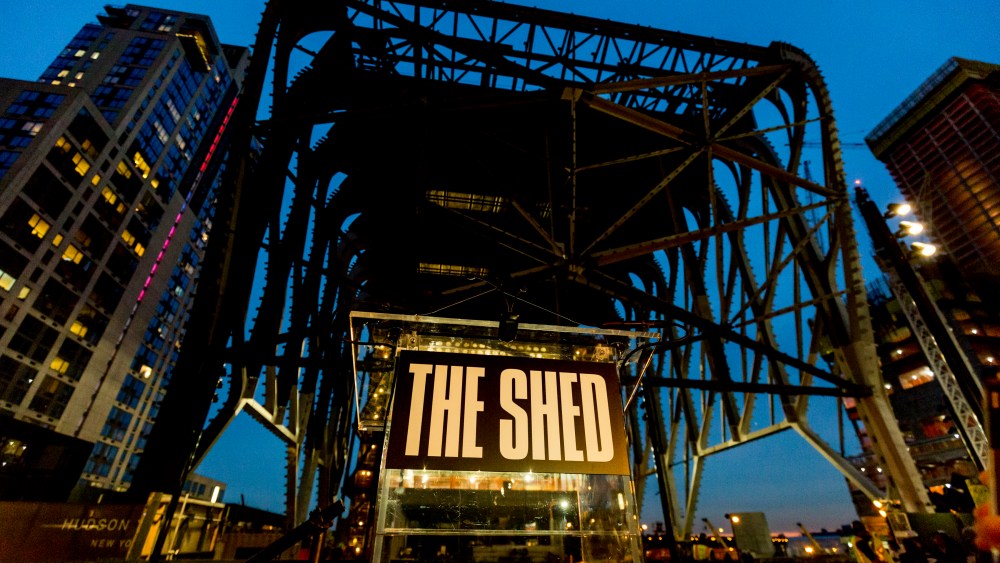 NEW YORK — Artists and leaders from the world of art, culture, fashion, government and business gathered for a cocktail party Wednesday night at The Shed, rising in Hudson Yards on the West Side of Manhattan. They were there to get a peek of the multiarts center designed to commission, produce and present all types of performing and visual arts and popular culture, and which is likely to become the new home of New York Fashion Week, beginning in 2019.

“We’re not commenting on specific things, but it’s a natural home to reconstitute fashion week,” Daniel L. Doctoroff, chairman and president of The Shed, told WWD. Interestingly, during his talk, he didn’t mention fashion among the various creative disciplines that would be using the Shed.

Diane von Furstenberg, chairwoman of the Council of Fashion Designers, and a board member of The Shed, said she expects that the fashion shows will be moving to the location. “I hope so, that’s the plan,” she said. The Shed is flexible enough to become anything, for both large and small audiences. The building’s flexibility allows it to adapt to different art forms and evolving technologies.

Industry consultant Fern Mallis, who is credited with creating New York Fashion Week at the Bryant Park Tents, said about The Shed’s use for NYFW: “It certainly seems to be in the plans. They’ve been talking about it for a long time.” But she questioned whether fashion designers will still want to do fashion shows four or five years from now. The whole way people show their collections could change, she said.

The Shed’s design features a movable shell on rails — the movement of the 4,000-ton outer shell was officially shown Wednesday night for the first time — that sits over a fixed part of the building. The 200,000-square-foot structure is able to expand or contract, depending on the specific event. A 20,000-square-foot plaza is available for outdoor programs, or it can be transformed into a space that can seat 1,200. There is also a black-box theater that accommodates 500 and two column-free galleries that span 25,000 square feet. Guests were given hard hats to explore the construction site.

In his remarks to the crowd, Doctoroff thanked Michael R. Bloomberg for “his remarkable gift” of $75 million to The Shed and the decision “to put a cultural institution at the very heart of this edge of New York City.” When Bloomberg gave his gift, he had only two requests. “To make it unlike anything else, anywhere in the world, and that it should be an institution that helps to ensure that New York remain on the edge culturally,” said Doctoroff, who previously was president and chief executive officer of Bloomberg LP and deputy mayor for economic development in the Bloomberg administration. Designed by Diller Scofidio + Renfro in collaboration with Rockwell Group, The Shed is scheduled to open in spring 2019.

Overall The Shed has raised $420 million “for something entirely new, that hasn’t existed before,” said Doctoroff, who also thanked Mayor Bill de Blasio. “The de Blasio administration has been extraordinary in its support,” he said. Doctoroff noted that they are building a platform “for artists to create art on.”

Alex Poots, founding artistic director and ceo of The Shed who was previously artistic director of the Manchester International Festival and the Park Avenue Armory, described how he envisions what The Shed will be. “It’s the world’s first commissioning center for all arts — performing arts, visual arts, popular culture…great theater makers, great dancers. This will be a place for all of them.. There’s a need not just for centers of excellence, but a place where artists from all walks of life are welcome and audiences of all walks of life are welcome.”

He revealed the commission of a large-scale, site-specific art work by Lawrence Weiner, the continued collaboration with FlexNYC, a free, citywide residency program in dance activism for young people and an art and technology partnership with MIT Media Lab.

Manhattan Borough President Gail Brewer said, “This will be a jewel in the crown that sets our city apart from all other cities in the world.”

Those in the crowd were duly impressed. Julie Taymor, who’s directing “M. Butterfly” with Clive Owen which will open on Broadway in October, said she’d love to direct a show in The Shed. Lew Frankfort, former chairman and ceo of Coach (which is located at 10 Hudson Yards, next to The Shed), and who is on The Shed’s board of directors, said, “I couldn’t be prouder. It’s a testimonial to innovation and will be a living park in the epicenter of New York for the next 100 years.”

Turning to another interest close to his heart, Frankfort was asked what he thought of Coach buying Kate Spade. “I think it’s a great decision on the part of Coach and Kate Spade. Both brands are complementary. There’s only a small amount of overlap between consumer bases and the opportunities are very substantial.”