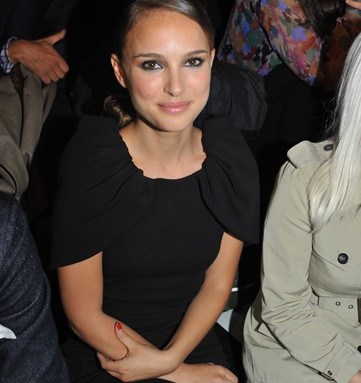 VALLI’S GIRL: “It’s scary,” pint-sized Natalie Portman said as a crowd of photographers surged toward her minutes before the start of Giambattista Valli’s show Thursday. Wearing a black dress from this season’s collection, the actress, who was accompanied by her stylist, Kate Young, sang Valli’s praises. “I love his clothes. He’s a great new talent,” she said. Fellow front-row guests included Lapo Elkann and his girlfriend, Bianca Brandolini d’Adda, who has a French movie in the pipeline. Italian actress Eva Riccobono, meanwhile, said she just wrapped her first film, “Grande, grosso e Verdone.”

ELFERS’ ADIEU: An emotional farewell en masse for Lord & Taylor’s departing chief executive officer, Jane Elfers, was held on the store’s rooftop patio Thursday afternoon, with a total of 500 central executives and store employees on hand. “This has been a week of sadness,” said one of the executives, who requested anonymity. “This place won’t be the same.” L&T’s owner, NRDC Equity Partners, disclosed last week that Elfers, along with chief operating officer Mark Weikel, would leave the store as part of a broad consolidation of NRDC retail businesses for cost savings. NRDC also owns The Bay, Zellers, Fields and Home Outfitters, all in Canada, as well as Fortunoff. More layoffs are expected this month. Elfers already gave her official parting words to the team a few days earlier, but she entered the party proudly wearing on her suit lapel what she wears every day at the store, her “I love Lord & Taylor” pin.

“I was overwhelmed, not only by the turnout, but by the outpouring of emotion,” Elfers said after the event. “I care so deeply about the people here. We have worked together for so long. They know they are like family. It meant the world to me to have the opportunity to thank them personally and say goodbye. I am so proud of everything that they have accomplished.” She said that today would be her last day at the store. Her successor, Brendan Hoffman, arrives on Monday