Winona Ryder presented the president of Marc Jacobs International and his husband, Alex Cespedes, with the My Hero award. 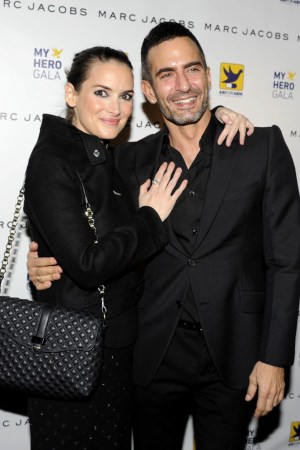 6 Celebrities Who Launched Skin-Care Brands in 2020

THE TIME OF THE HERO: Longtime Marc Jacobs fan Winona Ryder presented the My Hero award to Robert Duffy, president of Marc Jacobs International, and his husband, Alex Cespedes, at the Aid for AIDS gala on Tuesday. “I’ve always marveled at his immense passion and tireless efforts and the way he just simply gets things done,” said Ryder of Duffy. “When he’s moved by something, it’s going to happen and he’s with it till the end.”

Duffy, recovering from hip replacement surgery and walking on crutches, credited Cespedes for his involvement with the AIDS organization, which works primarily in Latin American and Caribbean nations.

On hand for the silent auction and dinner were Alejandro Santo Domingo, Fabiola Beracasa and Milly designer Michelle Smith, amidst a sea of Spanish-speaking glamour girls.

Jacobs, for his part, was still excited about his unexpected cameo as a cartoon doll on last week’s episode of “South Park.” “I wrote to [South Park creators] Matt and Trey yesterday. I told them I’ve enjoyed several successes and been awarded many awards — but none as great as being immortalized as Muscleman Marc on South Park,” enthused the designer, who is an ardent fan of the show. He went on to muse about possibly collaborating with the “South Park” duo to produce an actual doll.

The designer will again be on-screen in the upcoming movie “Disconnect,” helmed by “Murderball” director Henry Alex Rubin.

“It’s not something I’d like to repeat, but it was an amazing experience,” he said of his three-day shoot that wrapped on Saturday, refusing to give any details on the role on request of the director. “I did prepare, although I was told by the director not to prepare too much. He wanted some spontaneity.”