Inspiration for the collection was based on the death of his father, which prompted a return to Thailand, Wisharawish Akarasantisook said. 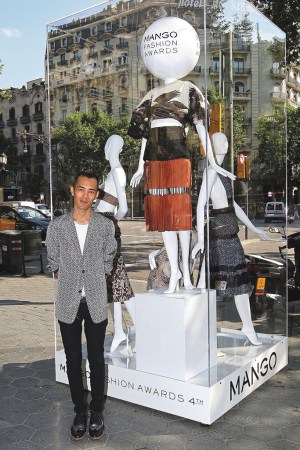 OverActive Media and H4X Team Up to Go After Gamers

THE WINNER: Thai designer Wisharawish Akarasantisook has won this year’s Mango Fashion Awards, beating out nine other finalists. Inspiration for the winning collection was based on the death of his father, he said, which prompted a return to Thailand (after four years in Paris), Buddhist temples and “the relationship between life, death and nature. It’s a collection with a lot of detail and hand-made pieces.”

Prize winnings totaled 300,000 euros (or upwards of $372,000 at current exchange) and on the jury for this fourth edition were Kate Moss; the King of Spain’s ex-son-in-law, Jaime de Marichalar, and Saks Fifth Avenue’s fashion director Colleen Sherin.

This story first appeared in the May 31, 2012 issue of WWD. Subscribe Today.
You're missing something!
SUBSCRIBE NOW
load comments
blog comments powered by Disqus