The event was part of the Cool Wool campaign by The Woolmark Company, to promote wool as a fabric for all seasons. 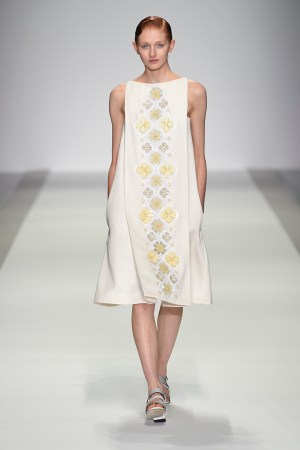 WILD ABOUT WOOL: Designers Lou Dalton and Holly Fulton — along with fashion writer Colin McDowell and Lindsay Taylor of the wool merchants Holland & Sherry Group — gathered for a breakfast hosted by The Woolmark Company at London’s Ivy Club Wednesday morning to dispel the notion that wool is only for the winter. The event was part of the Cool Wool campaign by The Woolmark Company, to promote wool as a fabric for all seasons.

Men’s wear designer Dalton noted that merino wool suits the idea of “season-less” collections. “I think the male consumer, they don’t tend to buy seasonally any more, they want something that will be a transitional product,” said Dalton. “[Merino wool is] breathable, it retains the heat and it’s also a great product to wear.” Fulton said that for her spring 2015 collection, she’d worked the fabric into evening wear. “[Merino] gives you an amazing drape, and the natural coil of it means it springs back, so it doesn’t crease as much…it allows you a certain amount of creative freedom, particularly if you’re draping with it. It retains the shapes that you want to achieve quite well.”

The talk also turned to how mills are actively working with designers to develop the type of wools that suit their collections. “Things have changed and the mills have become more flexible,” said Taylor of Holland & Sherry Group. “We have designers that come and say, ‘We want X, Y and Z,’ and we’ll say, ‘Yes, we’ll see what we can do for you.’ We would like to help because we’d like your business. We would like to think it’s a partnership.” Taylor also said that the provenance of wool is increasingly an important issue, particularly for China and India. “In markets such as China they’re extremely interested in the provenance of literally everything, from the fiber to where it’s woven to where the garments are made,” she said.