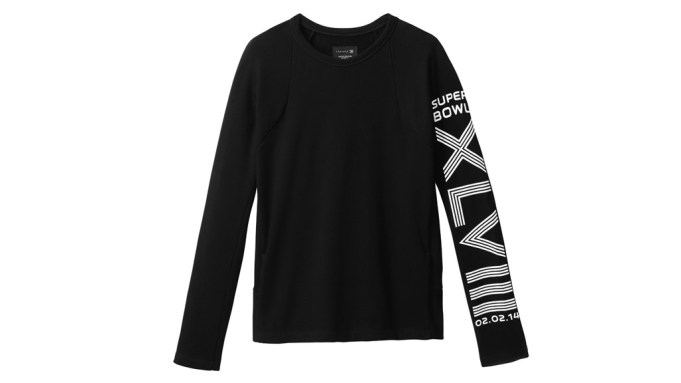 The four-piece capsule collection features a sweatshirt and a long-sleeve layered T for women and men. As brand ambassador for NFL women’s apparel, Johnson ironed out the deal with Theory’s ceo and the NFL’s director of consumer products Rhiannon Madden.

Johnson said, “The Super Bowl is such an iconic sporting event and we are so proud that it will be held in the New York/New Jersey metro area this year. I wanted to create a stylish fashion forward shirt commemorating the event that fans could wear well beyond The Big Game and knew that Theory would be the perfect licensee.”

As of Wednesday, the Theory 38 x NFL capsule collection is being sold at Theory New York City’s retail stores, the Theory and NFLShop Web sites and Bloomingdale’s flagship. Theory 38 x NFL, which retails from $95 to $145, will also be available on Super Bowl Sunday at the stadium shop in East Rutherford, New Jersey.