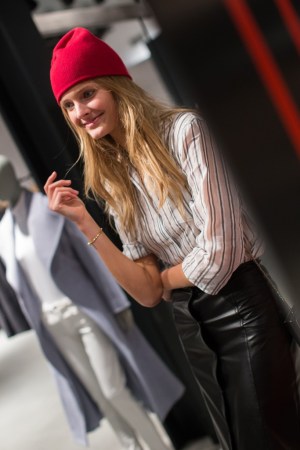 At Theory’s flagship store in Manhattan’s Meatpacking District on Thursday night, the label and Jonathan Adler feted their collaborations with the Red Campaign, which was founded by Bono to raise money to fight AIDS.

“This is a beautiful thing that we are able to support Red. We have produced sets of products that when purchased, provides medication to people,” Olivier Theyskens said.

The designer was chatting with Constance Jablonski, Coco Rocha and Juliana Schurig about their Thanksgiving plans, or lack thereof.

“It’s a shame, but you don’t really have this holiday in Europe,” he said.

Rocha, in a black Theory motorcycle jacket, admitted that, as a Canadian, she doesn’t celebrate the holiday either. “I’m actually in the middle of renovating my house up in Westchester,” she said.