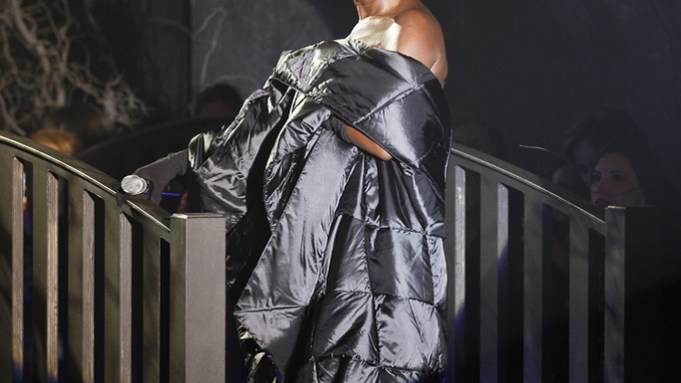 Musical notes, whether live or DJ’d, crossed the genres. A few highlights: Nina Persson (of Swedish rock band The Cardigans) at Rodebjer…Yeohlee’s bluegrass jaunt with The Down Hill Strugglers in New York…Brit rapper Shystie taking the stage at Nasir Mazhar in London…Grace Jones singing amid the fantasy forest set at Philipp Plein in Milan…Antony Hegarty playing with a 25-piece orchestra at Givenchy and Fred Astaire piped in at Dries Van Noten in Paris.

At the Lincoln Center venue in New York, IMG show producers set the tone throughout the week in the common area outside the runway rooms by hiring Bill Coleman to select a rotating lineup of DJs (including himself) to be stationed in an elevated booth overlooking the main tent and lounges. Coleman and his team, which includes Jacob Wilson and Stephen Bauer, reviewed the previous shows of the scheduled designers, studied their social media channels and read bios and other background material to devise specific playlists for each day’s lineup. The result was more than 60 hours of music provided by 19 DJs.