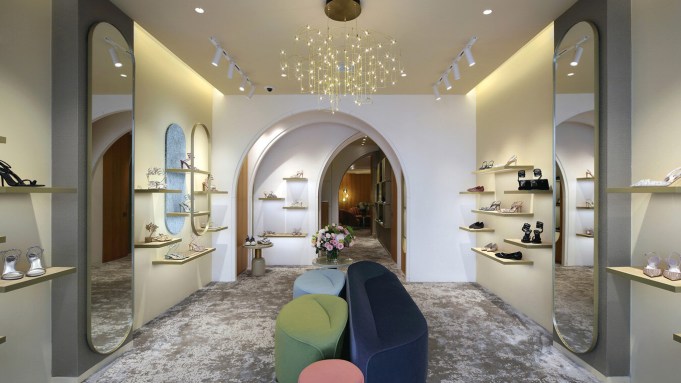 Paris is back in action, with a wide selection of new boutiques, restaurants and art to check out in between fashion shows.

STOREFRONT: Tradition and modernity mingle at the latest René Caovilla flagship in Paris, where white arches nodding to the luxury footwear label’s Venetian home and geometric velvet seating in jewel tones are the backdrop to try on the glamorous styles lined on floating shelves along the walls.

Joseph Duclos artistic director Ramesh Nair wanted a peaceful haven in the bustling Saint-Honoré area. That’s exactly the feeling exuded by the leather goods house’s first flagship, designed by French interior architect Tristan Auer, with its arches, curving furniture, delicate lighting and even a gently bubbling fountain that all hark back to the brand’s ancestral workshop in Southwestern France.

Bespoke footwear brand Maison Felger and luxury leather goods label Phi 1.618 met over their shared leather-craft heritage. So when the time came to open shops in Paris, they decided to join forces for a flagship in the tony 7th arrondissement, presenting both lines in a charming old-world boutique setting. — Lily Templeton

The Ritz Paris hotel just inaugurated a new destination for cocktail-lovers with the Sept. 27 opening of the Ritz Bar, whose centerpiece is a monumental brass lantern, carved with an astrological motif, that will come alive every day at 5:30 p.m. sharp, casting moving shadows on the ceiling. To cap off the experience, try one of the 12 zodiac-themed cocktails.

Gone are the days where hotel food was a better-than-nothing option, with the hottest — even “Top” — chefs of the moment taking up positions at Parisian addresses. Take your pick from star chef Jean Imbert and winner of the 2012 edition of the culinary talent show, now heading the kitchens of the iconic Plaza Athenée; former 2013 finalist Yoni Saada, at the Phenice restaurant at Hôtel de Nell; or this year’s winner Mohamed Cheikh, who will be infusing the menu of La Pagode de Cos, the contemporary restaurant of La Réserve, with the Mediterranean flavors seen in the show and his summer-long pop-up restaurant Manzili.

For the third act of Silencio, founder Arnaud Frisch (who had imagined the original with David Lynch), took over a building and adjoining cinema in the chic and intellectual Saint-Germain-des-Prés neighborhood. Currently open to a happy few, Silencio-des-Prés will open its doors on Oct. 6 to the public, who will be ample to sample the bistro-chic fare of fermentation expert Guillaume Sanchez, cocktails by hit mixologist Remy Savage or catch one of many projections on offer in the modernist redesign by French architects Karl Fournier and Olivier Marty of Studio KO.

After a six-year hiatus, multicultural and multiuse center Electric Paris reopened this summer in the Gare du Nord area. An Eiffel-style former workshop has been transformed into an 8,500-square-foot hybrid space offering a 120-seat café-bar-restaurant featuring cocktails from Franco-Brazilian mixologist Jeanne Vauchelles, an art gallery and a training center with a focus on hospitality, but also a program of art-themed masterclasses open to the public. — L.T. and Joëlle Diderich

SHOWTIME: Craving art? Paris can meet that need with a rich selection of shows this season. (Remember, Paris will host its annual Nuit Blanche, or White Night, on Oct. 2, when the city opens the doors free to museum-, concert- and other performance-goers.)

The dream of a lifetime has come true, as the Arc de Triomphe was wrapped in some 270,000 square feet of shimmering silver material, as imagined by the late artists Christo and Jeanne-Claude 60 years ago. This 14 million-euro project was financed entirely by the sale of its preparatory sketches and artwork at Sotheby’s and overseen by Christo’s nephew Vladimir Yavachev.

Some lucky people will get a birds’ eye view when Karine Ohana from boutique investment firm Ohana & Co. co-hosts a breakfast on the rooftop on Sept. 30, along with Philippe Bélaval, president of the French National Monuments, and Bruno Cordeau, administrator of the Arc de Triomphe.

For Georgia O’Keeffe’s first retrospective in France, the Centre Pompidou has culled some 100 paintings, drawings and photographs spanning the American artist’s career.

Over at the Modern Art museum, more than 350 works, including paintings, photographs, furniture, drawings and textiles, allow viewers to trace the artistic development of Anni and Josef Albers, pioneers of 20th-century modernism.

On the Left Bank, “Vivian Maier” provides an intimate look at the reclusive street photographer, whose body of work was discovered posthumously. Her biggest retrospective to date, it features 278 photographs, including 142 previously unseen archives belonging to the photographer, alongside vintage photos, Super 8 and 16mm films and audio recordings that shed new light on her practice.

Back across the Seine, Henri Cartier-Bresson’s photographs inspired by Paris are on display at the Musée Carnavalet in what is the museum’s first exhibition following its renovation.

Paris’ Jewish museum hosts an exhibit focusing on a generation of artists, including Marc Chagall, Amedeo Modigliani and Chaïm Soutine, who moved to Paris between 1905 and 1940 in a search for artistic, social and religious freedom.

Soutine’s work pops up again at the Orangerie, which juxtaposes his paintings with works by Willem de Kooning to explore the impact the Russian painter had on the American artist.

Yves Saint Laurent’s strong connection to Lyon, France, a textile capital, is explored in a show at his eponymous museum.

“Vivian Maier,” through May 29

“Yves Saint Laurent: Behind the Scenes of Haute Couture in Lyon,” until Dec. 5

WHITE-GLOVE TREATMENT: Dior conceived the spa in the minus-one level of the just-opened Cheval Blanc hotel. The Peter Marino-designed space includes six suites, each one different. The Granville Suite, for example, has a floral decor reminiscent of Christian Dior’s childhood home.

The treatments on offer are bespoke, mixing Dior’s techniques, such as its tissue massage, and high-tech tools, like the one combining microabrasion with photostimulation. There are 48 treatments in all, with spa-goers able to take a plunge in the 30-meter pool next door.

Right by the Cheval Blanc, the Samaritaine department store is home to a Cinq Mondes spa, which includes seven treatment rooms, two of which are doubles; a private hammam, and a boutique. The menu of international treatments has one exclusive to the Samaritaine, alongside the likes of Ayurvedic and Taoist cures.

Conceived to be a Parisian apartment with Haussmann-style touches, the concept is exclusive to the Samaritaine. — J.W.

RIGHT BANK HOTEL: Once home to “La Samaritaine du Luxe,” an offshoot of the famous and today LVMH-owned department store, the listed Art Nouveau building designed by Belgian architect Frantz Jourdain near the Palais Garnier is now home to the five-star Kimpton St Honoré hotel. It’s revisited from top to bottom by interior architect Charles Zana in an opulent Art Deco spirit. In addition to 149 rooms, including 26 suites, the hotel also features the California-inspired Montecito restaurant, a rooftop bar offering views on the opera house and a spa. — L.T.