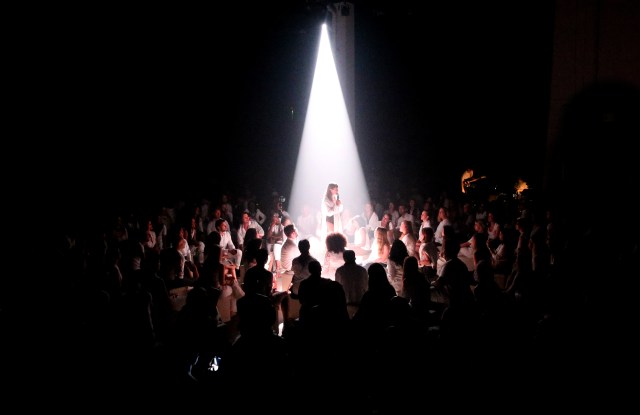 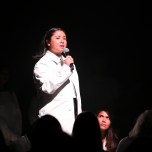 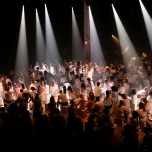 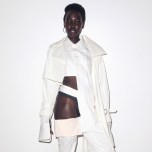 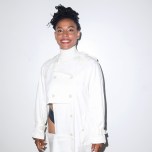 FEMINIST FASHION WEEK: It wasn’t P. Diddy’s White Party. No, the line of people outside SIR Stage 37 on Thursday evening — all of whom were asked to wear head-to-toe white to gain entry — were there for “Intersection,” what was promised to be an unconventional fashion show put on by Thinx, maker of “period-proof” underwear. One might recall the company’s arresting New York City subway ads last year, featuring peeled-back grapefruits, drippy egg yolks and other images which the Manhattan Transit Authority initially deemed too suggestive. After social media outcry, the MTA relented and up the ads went.

According to its web site, the Thinx line of panties, cofounded by ceo Miki Agrawal; her twin sister, Radha and their friend Antonia Saint Dunbar, are crafted from “four ultrathin micro-layers” that are “antimicrobial, moisture-wicking, leak-resistant and absorbent.” (Read: You’re supposed to bleed into them.)

Hard copy invitations for the Intersection event — which were hand-delivered to WWD’s offices by a member of Thinx’s staff a week prior — contained square-shaped slabs of concrete (and were mysteriously remiss of timing and location details). With the invites came instructions to smash the concrete onto the floor, an act meant to symbolize breaking the glass ceiling and damning the patriarchy, one of the company’s various mission statements.

Once the doors to the event were opened, the lights dimmed and guests took to their seats, atop white cubes in the warehouse space. One by one, performers stood up during the hourlong event, delivering stories and songs that ranged from moving to wickedly funny. The 10 speakers — which included a few models, a singer; a comedian; a former refugee turned model and humanitarian; a transgender actor and artist — each told their own tales of oppression, and included Niki Morrissette, Melina Dimarco, Iman Artwell-Freeman, Ashlee Haze, Sue Smith, Mari Malek, Maria Jan Carreon and Sawyer DeVuyst. All of them wore white jackets, shirts and dresses with generous cutouts designed to display black Thinx underwear beneath.

Miki Agrawal was the last speaker to take the floor, tearing up during the end of her speech, which preached for “servant leadership” and “service to others” and urged audience members to use their privileges to help others less fortunate. (Each guest was given a chart which mapped out types of privilege and oppression — e.g., “white,” “male,” “able-bodied,” “literate,” “attractive,” “young,” “upper-class” in the privilege category — lest anyone be unsure.) “What are your own unique privileges, and how have they impacted your experiences with others today, this week, this month, this year, this life?” Agrawal asked the room.

All of it was delivered with utmost earnestness. One thing’s for sure: Intersection certainly succeeded in breaking the mold for the typical New York Fashion Week experience.