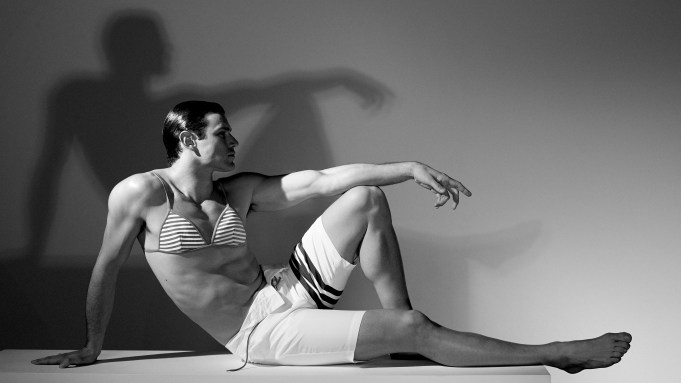 Thom Browne swam competitively when he attended college at Notre Dame. And now, he’s taking that love of the water and applying it to his latest ad campaign, which launched June 8.

The campaign, which was shot by Richard Phibbs, is the first time the company has showcased swimwear in its ads, a category Browne has been offering for more than a decade.

The campaign is intended to highlight board shorts and matching blouson jackets, but in typical Thom Browne fashion, he twists the gender codes of the pieces by showing men wearing bikini tops and women in just the shorts.

The images are meant to be reminiscent of classic American photography and show models posed as statues in swimwear that is either slung low or worn high, tied or untied.

The board shorts are made in Italy using proprietary swim tech fabrics and are offered in red, white, navy and gray with a four-bar stripe and adjustable drawstring. The blouson jackets offer the same stripe on the left arm.

The previous campaign, which was shot by Tina Barney and featured David Harbour and Anh Duong, highlighted uniform dressing.

Browne said swimwear has consistently performed as a top category for the brand across all regions since the launch and has now grown to become a core part part of the collection.

“I’ve been designing swim since 2011,” Browne said. “I initially created it because I wanted a pair of swim trunks. Just like the rest of my collection, I often design to fill a void in my closet.”

FOR MORE ON THOM BROWN FROM WWD.COM, SEE: