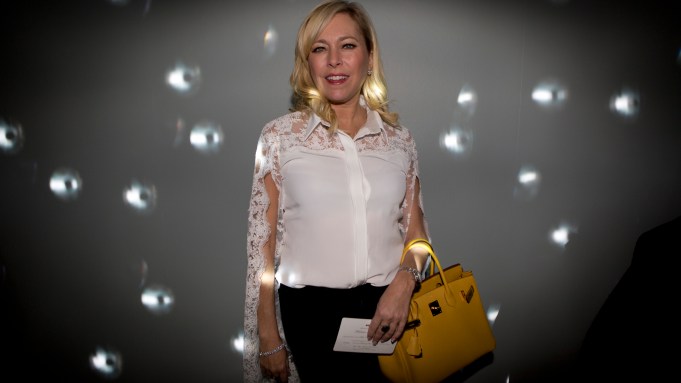 BAPTISM OF FIRE: Guests at the Alexis Mabille show in Paris on Tuesday included Sutton Stracke, who was taking a break after what she described as a “tumultuous” first season on “The Real Housewives of Beverly Hills.”

A Paris Couture Week regular, Stracke said it’s been a wild ride. “It’s been fun, it really has. It’s a lot of work, but I’ve done some things that I never expected I would ever do, like ride some weird bike in Santa Barbara, argue with people and throw plates and toss tables,” she said.

“No, we’ve actually had a really nice season, but it’s gotten a bit tumultuous near the end. And you cannot make it up: it’s not scripted, it’s real. It’s unbelievable,” she said. Presumably, she was referring to the reported drama between Brandi Glanville and Denise Richards.

Tilly pulled out her phone to show a picture of Tiffany Valentine, the murderous doll she plays in the “Child’s Play” horror film series, taken inside the store. “She’s wearing an Alexis Mabille dress,” she pointed out.

The actress, who has been voicing the character for more than 20 years, said she isn’t done with her yet. “We’re doing a Chucky television series now, so I’m Chucky Central,” Tilly said.