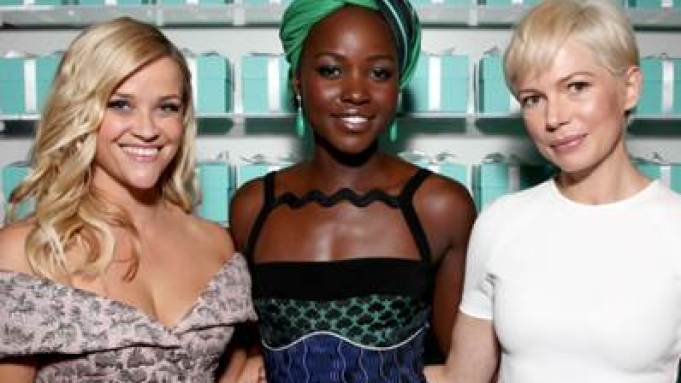 Oscar winer Lupita Nyong’o may not have been premiering a movie at the Toronto International Film Festival this past weekend, but she was the guest of honor at a dinner thrown by Vanity Fair and Tiffany & Co. to celebrate her as the face of the jeweler’s fall 2016 advertising images, dubbed the “Legendary Style Campaign.”

Toronto isn’t exactly a natural habitat for jaw-dropping diamonds, but for the glam event, Nyong’o was decked out in Tiffany’s classic and colorful designs, including chrysoprase cabochon and diamond drop earrings in platinum, and a tourmaline and diamond and sapphire and diamond ring in platinum. The total value of the jewels was $79,500. Michelle Williams was also loaned a diamond and platinum bracelet worth $275,000.

While the Toronto Film Festival tends to be more dressed-down compared to other high-profile film festivals including Cannes and Venice, the bar has been raised considerably this year with many more full-length gowns on the red carpet, from Louis Vuitton on Jennifer Connelly, Tom Ford on Amy Adams, Rodarte on Anne Hathaway, Gucci on Dakota Fanning, Valentino on Riley Keough, Dior Couture on Haley Bennett, Jenny Packham on Valorie Curry and Oscar de la Renta on Aja Naomi King. There have also been elaborate cocktail or ankle-grazing dresses on Charlotte LeBon (Dior), Hailee Steinfeld (Versace) and Fanning (Monse).