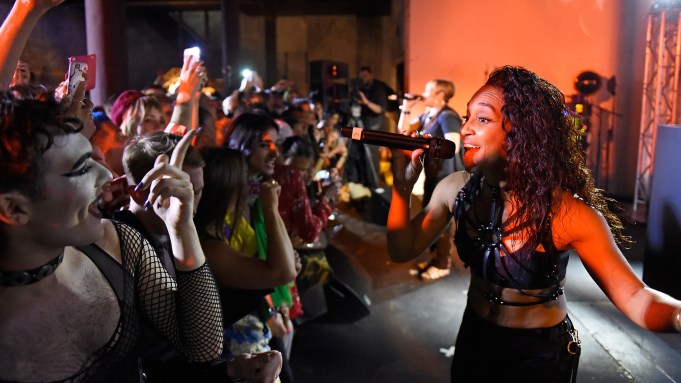 NINETIES NOSTALGIA: “I feel it’s going to get messy,” said Erin O’Connor at the European launch of Tiffany & Co.’s City HardWear party in east London on Wednesday evening. “There’s eccentricity, formal and couture. This is London at its finest.”

Held at The Lofts, O’Connor, Jade Parfitt, FKA Twigs, Pam Hogg, Edie Campbell, Charles Jeffrey, Skepta, Rafferty Law, Craig Green and Ryan Lo were among the guests who watched R&B group TLC take it to the stage and perform “No Scrubs,” “Diggin’ on You,” “Unpretty,” and “Waterfalls.”

The group hit a high note in the Nineties for songs such as “Creep,” “Ain’t 2 Proud, 2 Beg,” and “Unpretty.” They have sold more than 65 million records worldwide, TLC is the best-selling American girl group, and second globally to the Spice Girls. Their latest album, “TLC,” is due out next month.

Donned in a black Loewe ensemble, O’Connor said she loved TLC’s vibe and their look.”I feel I’ve just been transported back 20 years,” said the model.

Parfitt said she grew up listening to the group, and was singing in the car on her way to the event. She’s has more than one reason to be happy: “This is my latest project,” said Parfitt, who pointed to her baby bump. “Due in September! It’s my third baby. I’m struggling with names, though,” she said.

“I do love Tiffany’s – what girl wouldn’t? said Pam Hogg. The designer said she just finished creating costumes for an opera in Berlin and has plans to show next September during London Fashion Week. “I work everything in my head — I visualize.” As for her September collection, she said, “it will grow” and evolve over the next few months.

Other guests stepped into the back of a big-rig truck that showcased the edgy, utilitarian range filled with gold and sterling silver necklaces, bracelets and rings. Earlier in the day, Tiffany had installed a large gold-colored mechanical wrecking ball against an exposed brick wall in the warehouse- style venue.

“We did the smashing of the glass earlier today with the huge gold ball – the unleashing of this new collection,” said Barratt West, vice-president and managing director of the UK and Ireland. “This event for us is so cool. This part of London is edgy, and a bit gritty and a bit urban, which is really what the collection is all about. Tiffany City HardWear is all about the streets. It’s much more urban.”