In the shadows of Trump Tower, Tiffany cleverly looks to salvage holiday-season sales at its Fifth Avenue flagship. 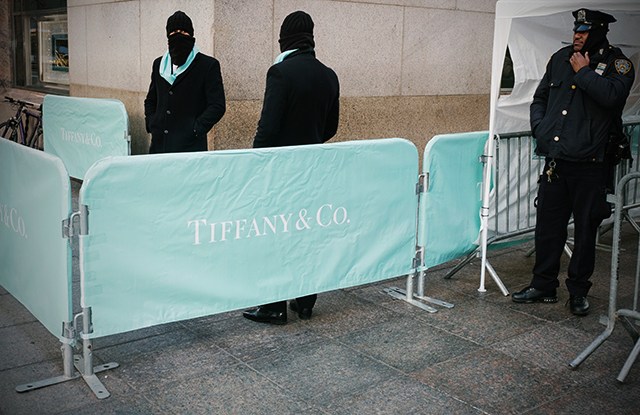 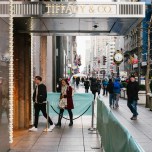 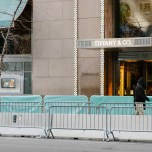 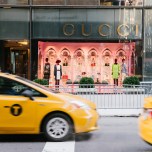 Tiffany & Co. has taken Trump matters into its own hands. WWD has learned that the jeweler has partnered with the New York City Police Department on mounting branded barricades that lead to its Fifth Avenue flagship — located on the same block as the cordoned-off Trump Tower.

Retailers in the tower’s vicinity — which include, among others, Gucci, Armani, Tiffany and Ralph Lauren — have reported a steep drop in foot traffic, with commotion and police restrictions limiting entry into the stores. Gucci, located inside the tower, is understood to pay about $25 million a year in rent.

Tiffany has cleverly organized a work-around, finding compromise with the NYPD. Using barricades swathed in monogrammed covers, fabricated of its signature robin’s egg blue — the jeweler has set up a slim pathway from 57th Street that snakes around onto Fifth Avenue, giving shoppers access to the store’s holiday windows as well as its main entryway. The barricade coverlets originally were made for the unveiling of the holiday windows, but that event was canceled because of the security cordon around Trump Tower.

To draw further attention that it’s business as usual inside the store, bellhops are stationed along the pathway, each wearing a standard-issue Tiffany-blue scarf, as well as uniform knit hats, neck warmers and gloves. In Thursday’s below-freezing weather, many grasped disposable hand-warming sachets.

A NYPD checkpoint sits just beside the Tiffany track — where visitors to the Trump Tower receive the first of multiple evaluations before being granted access inside.

When asked for comment, a Tiffany representative reiterated an earlier statement: “Tiffany is in frequent communication with the New York Police Department and U.S. Secret Service regarding safety and security along the perimeter of our Fifth Avenue flagship. We remain open for business with regular hours and welcome customers to enter the store via our 57th Street entrance if any barricades along Fifth Avenue are in place.

“Our flagship store windows, which feature sparkling scenes of New York City at the holidays, are now on display for all to see. Our facade has also been illuminated as planned.”

Tiffany executives have said the flagship accounts for less than 10 percent of the brand’s global sales.

In late November — amid multiple protests and intense congestion on Fifth Avenue — Tiffany released its third-quarter earnings report. At the time, the release stated: “Management has noted some adverse effect on traffic in that store and a continuation of sales softness relative to prior year and to the company’s other U.S. stores this year. The company cannot provide any assurance that sales in that store will not be negatively affected by this activity in the fourth quarter or in any future period.”

Protests and frenzy in the area have since softened. But the brand’s maneuvering of a less-than-ideal situation — in an area deemed last month as the world’s most expensive corridor for retail rents — remains at odds with the hand dealt to its fellow high-ticket neighbors.

The Gucci store has yet to initiate such shopper-friendly tactics. The same goes for Armani, which is similarly sequestered from foot traffic. Both stores are accessible upon requesting permission by the NYPD.