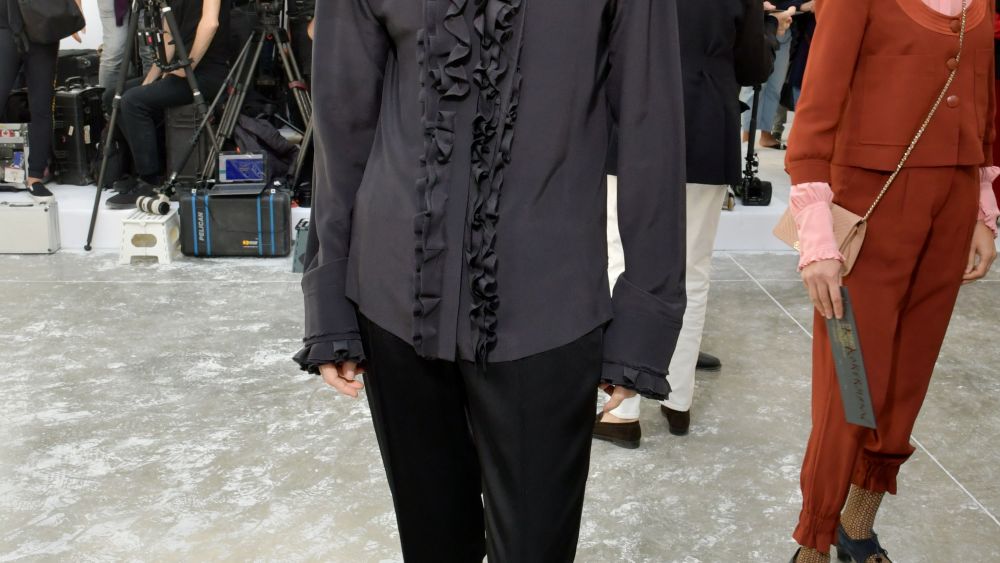 HIDDEN MESSAGE: Guests at the Haider Ackermann show were asked to tiptoe around a white chalk drawing on the floor of the Palais de Tokyo. “My name is on the floor!” marveled jewelry designer Delfina Delettrez, who immediately took a picture with her phone.

Model Farida Khelfa noted with dismay that hers was half wiped off. She has a role in Jean Paul Gaultier’s “Fashion Freak Show” at the Folies Bergères, but one that doesn’t require her to be on stage. “I play Dominique, the woman who helped him start in the business when he was very young. But it’s a filmed sequence.”

Sitting next to an elaborate “Tilda and Sandro” drawing, Tilda Swinton discussed the importance of color in her upcoming film, a remake of Dario Argento’s horror movie “Suspiria” directed by Luca Guadagnino out Nov. 2. She plays Madame Blanc, a teacher at the Markos dance academy in Berlin.

“All of us are affected by the colors we wear,” said Swinton, adding that Madame Blanc’s outfits are a variation of orange, brown, gray and purple. “There is a very iconic dress Madame Blanc wears that is just brown, and it made me think that she looked like a tree. When you’re making a film, you need to focus on what the color does to the frame.”

Other guests included Lou Doillon, who has just finished recording her next album, and chef Daniel de la Falaise, who is in the midst of writing his second cookbook. “In the big picture, working with local produce is the only sustainable way to feed the world,” he said. “The idea that everything is perpetually available is a delusion, and costs a lot of oil.”

Anja Rubik is also campaigning for a change in our habits. The model, who is an ambassador for Parley, says that it’s fashion’s role to set the trend of awareness and responsibility. “We’re the trendsetters. Fashion can give such an amazing example to the rest of the world,” she said. Her tips to reduce plastic in our every day life were simple: “No plastic bottles, no plastic straws, and always opt for paper or glass packaging in supermarkets.”