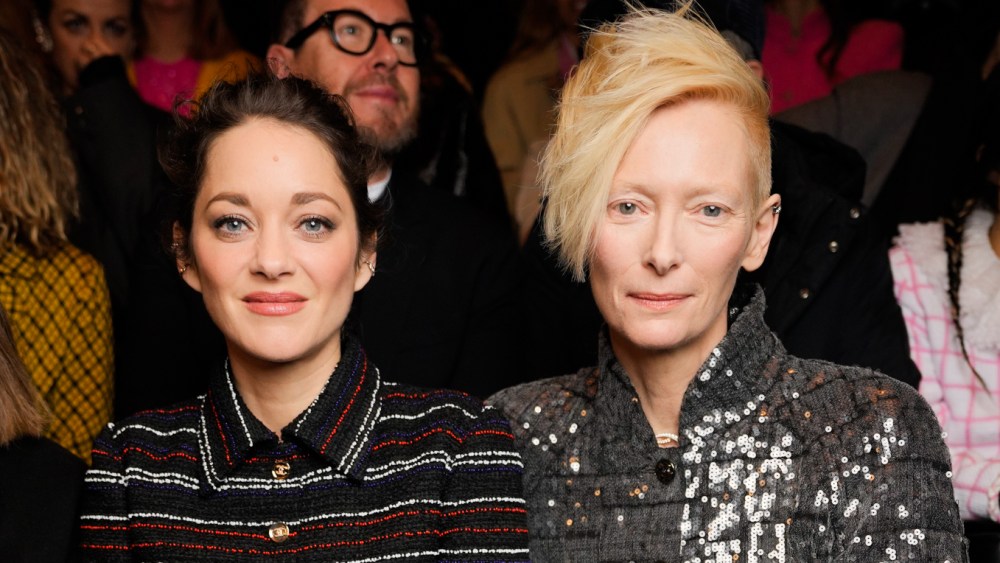 Tilda Swinton entered like the friendliest rock star in town, with her signature platinum locks shaved and sideswept, all while wearing a sequined silver bomber, and proceeded to hug and introduce herself to everyone in the front row. Chanel also brought together Marion Cotillard, Sadie Sink, Lucy Boynton, stylist Jenke Ahmed Tailly and Big Bang rapper G-Dragon.

Giant animals moved around the set, some with secret doors that models emerged from midshow, in sequined gowns, gold-flecked tweed and top hats, as if playing fashion magicians. Cotillard gamely stepped inside one of the giant animals to make a grand entrance for the camera.

Swinton joked about her reputation for “taking risks” with fashion. “One person’s risk is a comfort zone for somebody else. I’m just always looking for the play I suppose, looking for some sort of feeling of delight.”

Swinton, who lives in the Scottish Highlands when she’s not on a film set or at fashion shows, swears she wears Chanel at home mucking about in the mud. “Occasionally there’s a big old jersey or a fantastic pair of boots that come out and I will tell you that they last as well. I have a pair that I’ve had for 15 years and they’re still going strong,” she said.

“Asteroid City,” another collaboration with director Wes Anderson that she wrapped two years ago, is finally set to come out this summer. “I’m looking forward to seeing it as I can barely remember it now,” she joked. Her schedule is always packed, with three shoots this year alone and some long-gestating projects finally coming to fruition.

“I always say it’s a bit like being a farmer or gardener, you know, you just plant the seeds in the ground. And sometimes some of them take a very long time to come up. Some of them pop up quite quite quickly and then you just have to sort of deal with the schedule,” she said. “Some are very, very, very long growing plants, then the garden is always full.”

Gardens, and nature, is something that has been on Cotillard’s mind lately. The actress recently wrapped an episode of the upcoming Apple TV anthology “Extrapolations” that explores the environmental damage caused by climate change in not-so-far future dystopia.

“We have a tendency to separate ourselves from nature, and that is creating a lot of trouble. I want to be connected. It’s not always easy because we live in this society where there’s a lot of distractions,” she said.

She’s recently taken up meditation to quiet her mind and reconnect with both nature and her inner self. It has given her a new perspective, she said.

“Extrapolation” debuts in March, and her episode has a bit of a lighter touch. “It’s a comedy, so you can laugh. But I think that sometimes by laughing, you can connect with something and ask yourself, ‘Wow, why am I laughing at this? But what if it was actually real?’ It’s another way to question yourself and what is going on around you. It’s a good vessel for understanding.”

Sadie Sink, who costars in the “The Whale,” was thrilled for lead actor Brendan Fraser’s Oscar nomination revealed Tuesday morning. “It’s good to see something like that happen to a very genuine, deserving person. And that’s Brendan. He’s been so supportive and helpful, just to have next to me throughout all of this,” she said of the press blitz. “We’re all incredibly proud of him. And he’s just a light, like, the most pure person in the world.”

The “Stranger Things” actress, who started her career on Broadway, said she has to “warm up the vocal chords” for her upcoming musical “O’Dessa.”

She’s also learning guitar for the role, a “rock opera.” The music is “folky and beautiful.”

But asked if an album could be in the works, she demurred: “Oh, no way. My brain doesn’t work like that. It’s nice to do it through a character, but that’s not in the cards for me.”

She plays the French queen in the upcoming “Chevalier,” and none too favorably, she admitted. While there are new revisions to her story, Antoinette has been widely villainized through history, Boynton noted. “I was hesitant to highlight only that, because she was so much more than all of these things; however, in the context of our story, I think she’s a useful mouthpiece to highlight some very, very dark aspects.”

But the costumes are bright — a powder blue and another pink number hold a special place in Boynton’s memories. “It’s just having a very different silhouette and space that you can take up when wearing it, very different than shorts on a January day,” she joked.

It featured raw wood and cardboard animals that moved around playfully, created by artist Xavier Veilhan, to give the set a feeling of a village carnival. It was his third and final collaboration with the brand after a trilogy of fashion shows.

Going toe-to-toe with Malkovich was a masterclass. “I’ve never experienced such a certain profoundness and presence; he’s very instinctual and very much about being a mentor,” said Stangenberg.

The Chanel show was a moment of lightness after shooting the “very dark” film, she said. “People think acting is a glamorous profession, but it’s not. It’s actually so tough. It’s more like being in a circus. It’s very tough work and the little moments of glamour you experience they are just fun and hopefully full of joy,” she said.

British singer Olivia Dean is another up-and-comer who sat in the front row, though it wasn’t her first Chanel show. “It’s not my first rodeo,” she said. She’s been on tour around Europe and will be dropping her first single, the love song “UFO.” As a songwriter she says she focuses on the lyrics first, about an alien that lands in love. “I just sit at the piano and tinkle and see what comes out.”

It’s the first song from her debut album, though that title is still under wraps. “I definitely have nerves. I think a debut album is a scary thing. It’s like putting your mark in the sign like, ‘this is me. This is who I am.’ But I’ve really tried to make it just for me. And so that if people don’t like it, I love it. So I’m at peace with that.”

“House of the Dragon” star Sonoya Mizuno is just about to head back to set in March. She said unfortunately she doesn’t have any jousting or horseback riding scenes. Noting her white leather suit had a bit of an equestrian feel, she said: “Maybe I should ask them to put it in. I’m excited to go back into that world.”