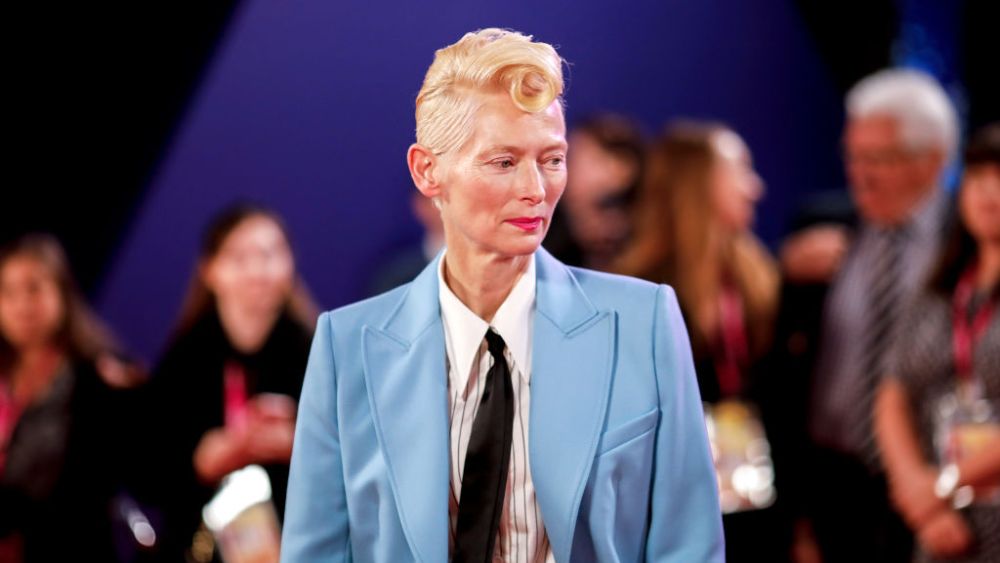 Tilda Swinton arrived at the BFI London Film Festival on Thursday in a look that married ’50s inspiration and David Bowie’s style for the premiere of her new film “The Eternal Daughter.”

Swinton wore a powder blue suit with a wide lapel collar, flared trousers that were almost waist-high and a pin-striped white shirt with a black tie. She topped off the look with a pair of matching light blue shoes.

Swinton’s platinum blond hair was styled in a retro-inspired updo that was a variation on a pompadour. The actress opted for a glowing makeup look that included a bright pink lip, highlighter and blush.

For several of her recent red carpet appearances Swinton has contrasted her blond hair with vibrant blue outfits. At the Venice International Film Festival premiere of “The Eternal Daughter,” Swinton’s hair was dyed closer to a canary yellow and she wore a blue pin-striped shirt from Loewe. At the press conference for the project, she specifically referred to her hair as her half of the Ukrainian flag. She wore a light blue sequined column gown with a train by Haider Ackermann for her red carpet appearance for the film.

Swinton is known for her often androgynous style, which has seen her don short pixie cuts and menswear silhouettes. She’s a fan of deconstructed blazers and cigarette pants, which she often wears on the red carpet.