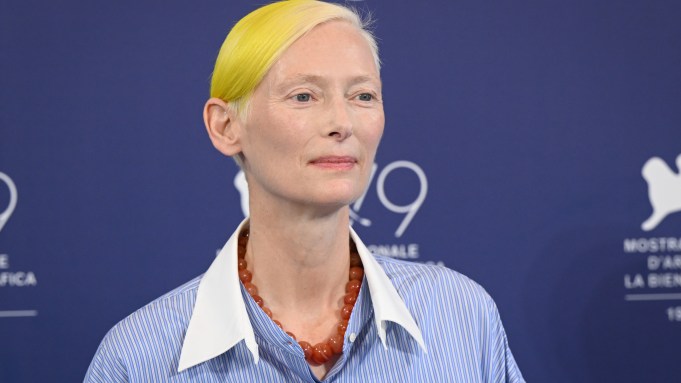 Tilda Swinton is giving a nod to Ukraine.

On Tuesday, the award-winning actress attended the photo-call for her newest movie, “The Eternal Daughter,” wearing an outfit by Loewe, which featured red trousers and a light blue, pin-striped, oversize button-down. Her normally blond pixie hair was also dyed a bright yellow.

During the press conference for the movie, Swinton stated that her look was in support of Ukraine while the country is confronting an ongoing invasion from Russia.

“It’s my honor to wear half of the Ukrainian flag,” she said, responding to a journalist who complimented her look, representing the bottom half of the country’s flag.

The film, directed by Joanna Hogg, tells the story of a middle-aged daughter and her mother who must face the long-buried secrets of their former family home, which was once a grand mansion that has transformed into an eerie hotel.

The 79th edition of the festival is taking place until Saturday and will debut some of the year’s most-anticipated films, such as the biographical drama on Marilyn Monroe “Blonde,” “The Whale,” “The Son” and Olivia Wilde’s anticipated thriller, “Don’t Worry Darling,” which stars Harry Styles and Florence Pugh.