Collection to make its debut on Feb. 9. 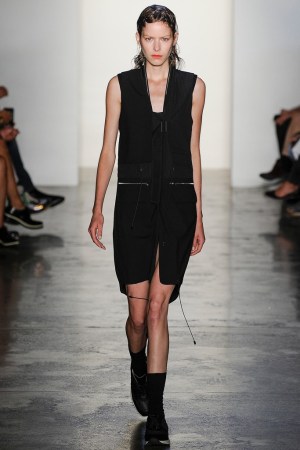 LONDON CALLS COPPENS: This season marks the full expansion of Belgian-born, New York-based designer Tim Coppens into women’s wear, and in the United Kingdom, his collection will launch exclusively at Harvey Nichols on Feb. 9. “We’ve supported the men’s wear line since day one, and love the overall aesthetic of the brand. We were just waiting for the right moment to bring women’s wear into the mix,” said the store’s contemporary buying manager, Shereen Basma.

Coppens’ move to London is a homecoming of sorts. As with men’s wear, the collection of 12 looks riffs on the British music scene of the Nineties. “I came to the U.K. for the first time when The Stone Roses and Primal Scream were about,” he told WWD.

And while the references may be edgy, traditional tailoring is paramount. His women’s wear is an extension of men’s, with shared fabrics and prints, but with an additional focus on more fluid materials. The signature piece is a fresh take on his parka, combining a very traditional pleated back in classic virgin wool with a silk nylon parka front.

Coppens’ collections always tend toward a personal or autobiographical element. The designer skateboarded for 15 years, traveling the world in the process.

“The first time I came to New York was to skateboard,” he said, adding that the autumn/winter 2015 line he plans to show in New York later this month takes its inspiration from Texan skateboarding champion Raney Beres and the early work of photographer Glen E. Friedman, who “shot a lot of bands from the Eighties and Nineties that I was into back in the day, and was also involved in that skate culture.”