Add Elie Tahari to the list of companies embracing the marketing and commercial opportunities presented by the iPhone. 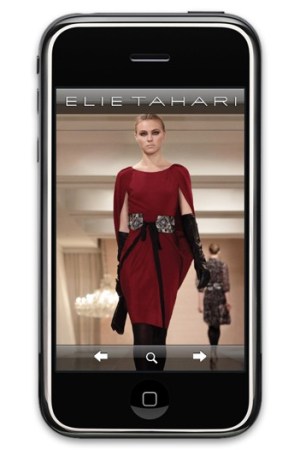 TIME FOR AN APP: Add Elie Tahari to the list of companies embracing the marketing and commercial opportunities presented by the iPhone. Next month, Tahari will launch a free iPhone application that will enable users to see looks from the fall 2009 runway, swipe or flip them for details, and navigate online shop where to purchase the pieces. “We are exploring nontraditional marketing strategies to maximize our presence, reach the discerning Elie Tahari customer and create an efficient, green and profitable platform for the future,” said Rory Tahari, the designer’s wife and vice president of the company.

TOKYO TO PARIS, VIA COLETTE: Uniqlo will make its much-anticipated entrance into the French market with a little help from Colette. Ahead of the opening of its Paris flagship, the Japanese casualwear label will take over the first floor of the concept store from Aug. 31 to Sept. 26. The shop-in-shop will be a microcosm of the planned Paris megastore, offering the label’s basics including its UT Tees line, Japanese denim jeans, plus a one-off collection of 500 cashmere sweaters embroidered with the phrase “From Tokyo to Colette.” The label, which has been testing the French market since late 2007 via a small store in Paris’ La Défense business district, opened a pop-up shop in the Marais area this summer, while its major offensive, a 23,000 square-foot flagship on Rue Scribe near Opéra, will open for business in the fall.

LEGENDS OF THE FALL: Marc Jacobs will be getting another accolade to add to his trophy chest — one of Pratt Institute’s Legends 2009 awards. Architect and designer David Rockwell and musician, poet, and visual artist Patti Smith will also be honored at the Oct. 29 benefit, which raises money for students’ financial aid. Eighty percent of Pratt’s students require such assistance. Pratt president Thomas F. Schutte and board of trustees chair Mike Pratt will cohost this year’s Legends event at 7 World Trade Center. Kurt Andersen, Amy Cappellazzo and Marjorie Kuhn will serve as co-chairs. For Jacobs, the gala should be a night off, but not so for Smith, who will perform after dinner.

AUSSIE NIGHT: There wasn’t a single can of Foster’s in sight, but the inaugural dinner of the Australians in New York Fashion Foundation on Wednesday night was an authentic Oz fest. A crowd of stylish Down Under transplants filed into Antony Todd’s Midtown loft to sup on Australian fare and to discuss their homeland. “We are like a secret society,” said Aussie model Nicole Trunfio. “No one else gets our sense of humor.”

Others disagreed. Kristy Heinze, host of the Australian spin-off of “Project Runway” (and wife of Netscape billionaire Jim Clarke), boasted about her people’s affable nature. “The stereotype is that we are nice and fun, and it’s true,” she said as an overzealous partygoer shattered a glass of Champagne. “See?”

Sarah Wynter, meanwhile, took the opportunity to dispel clichés. “It’s not true that we all know each other,” said the actress and New South Wales native. “I’ve actually met some new people here tonight.”

In fairness, Wynter might have been referring to the fete’s small faction of non-Aussies, who included Francisco Costa, Karlie Kloss, Jane Lauder and Italo Zucchelli — none of whom seemed to mind being the odd ones out. “Wherever I go, there are Italians everywhere,” said Zucchelli. “It’s nice to have Australians everywhere for a change.”

ALL A TWITTER: Rachel Roy will partner with Estelle to create a jewelry line. Roy revealed the news last week via Twitter, saying, “I am excited to work with Estelle on a jewelry collection, which will debut in spring 2010.” Roy didn’t reveal details, but said through her spokeswoman the line “is still in the very beginning stages.” Estelle, who is to host the opening party for Roy’s pop-up shop in New York during fashion week this September, already has had design collaborations with shoe designer Jonathan Kelsey, in which they created a bag called the Belvie for Belvedere Vodka, and also designed a T-shirt for H&M’s recent AIDS-related campaign and collection.

BENZ MOTORS: Chris Benz spent last weekend driving a rented convertible around Los Angeles to show his fall collection to customers at Saks Fifth Avenue Beverly Hills and Melrose boutique Beckley, as well as guests at a Venice Beach house party Friday night. The casual bash, held in a vintage Craftsman bungalow belonging to friends of the designer, drew his pal Eva Amurri as well as Cuba Gooding Jr. “I’ve been trying to cram in as much Los Angeles as possible,” said Benz, who dined at Cecconi’s the same night as Whitney Houston and Clive Davis, shopped at Maxfield Bleu and Opening Ceremony and cavorted at Disneyland. “I’d like to be able to come back on a more regular basis.”

JOURDAN RETURNS: Charles Jourdan is due for a comeback. A spokeswoman for Groupe Royer, which acquired the beleaguered footwear brand in December 2008, confirmed the first collection under designer Alexandra Neel will be unveiled at Paris’ Premiere Classe salon in September.

Y-3 TAKES PHILLY: Y-3 will open its first U.S. women’s and men’s shop-in-shop at Joan Shepp in Philadelphia on Saturday. Shepp has been carrying Yohji Yamamoto’s collection for 25 years and has carried the Y-3 line since spring-summer 2007.

Located on the store’s mezzanine level, the 600-square-foot Y-3 shop-in-shop will be designed in a contemporary black-and-white minimalist style. To kick off the shop’s opening, Shepp will throw a party Aug. 20 at the Rittenhouse Square store.