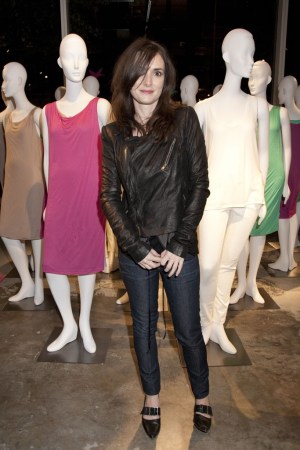 “I saw it as a design challenge, because I don’t really like the idea of ‘seasons’ in fashion,” Gregory explained, gesturing at a small army of mannequins wearing his T-shirt dresses. “I don’t think seasons make sense. Things don’t really change that much. It’s very forced. So with this, I wanted to use a timeless fabric — it’s quite modern, I mean, we’re patenting it — but it’s timeless. And each of these you can wear something like 80 different ways.”

Models strutted a catwalk with empty coffee cups and newspapers before stripping to their under things, turning the garments inside out and slipping them back on. A few smiled coquettishly and spiked beach balls at the audience. Winona Ryder was on hand to take in the scene.

“I’m wearing one right now,” Ryder enthused of the tank tops, pulling at the hem of her tank top underneath her zipped-up motorcycle jacket. Hers appeared to be all black, which seemed sort of beside the point.

“It’s true,” she said. “But it’s ecologically responsible…and you still get to wear it different ways, and it would make packing much lighter, which is something to consider.”