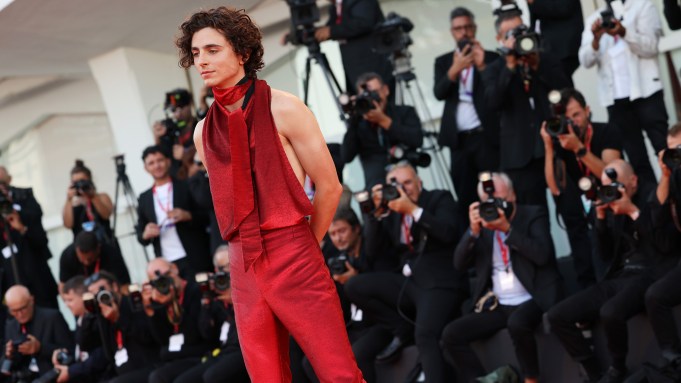 Timothée Chalamet is staying true to his eccentric style.

On Friday, the actor walked the red carpet for the premiere of “Bones & All” at the Venice Film Festival wearing a custom outfit by Haider Ackermann, which featured a metallic red halter-neck top with backless detailing and matching tailored pants paired with red boots. He also wore sunglasses by Ray-Ban.

Chalamet collaborates frequently with the French fashion designer, wearing his designs often and even launched a hoodie together in December to support Afghanistan Libre, an organization that supports women’s and children’s rights in the country.

The Oscar-nominated actor stars in the coming-of-age romantic horror movie alongside Taylor Russell, who was also present at the premiere. “Bones & All” tells the story of two cannibalistic lovers named Maren and Lee who road trip across America in the 1980s.

It was directed by Luca Guadagnino, who also directed “Call Me By Your Name,” which gained widespread critical acclaim and recognition. Chalamet also starred as the lead in the coming-of-age romantic drama, along with Armie Hammer.

Chalamet is known to style himself for most events and premieres, dressing himself in some of the most eccentric and striking ensembles, particularly for his press tour for “Dune” and his Oscars outfit in which he went shirtless for a sequin suit by Louis Vuitton.

Earlier on Friday, he attended the photocall for “Bones & All” wearing a look by Celine that featured a floral wool cashmere cardigan, camouflage cargo shorts, black lace-up boots and sunglasses paired with a white graphic T-shirt.

“Bones & All” had its world premiere Friday during the festival and is scheduled for a theatrical release on Nov. 23.