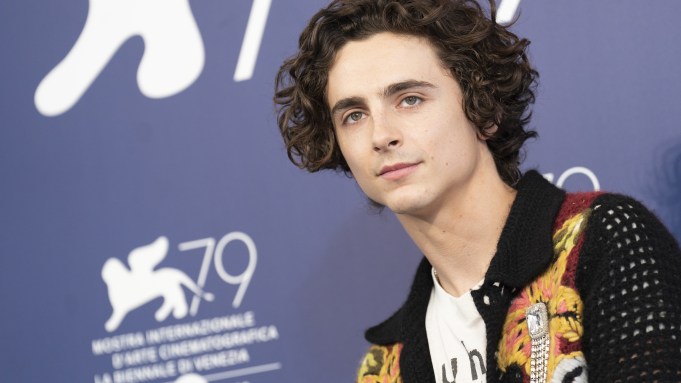 Timothée Chalamet has arrived at this year’s Venice Film Festival.

On Friday, the Oscar-nominated actor attended the photo-call for his latest movie, “Bones & All,” wearing a look by Celine that featured a floral wool cashmere cardigan, camouflage cargo shorts, black lace-up boots and sunglasses paired with a white graphic T-shirt.

The actor stars in the coming-of-age romantic horror movie alongside Taylor Russell, who was also present at the photo-call. “Bones & All” tells the story of two cannibalistic lovers named Maren and Lee who road-trip across America in the ’80s.

It was directed by Luca Guadagnino, who also directed “Call Me By Your Name,” which gained widespread critical acclaim and recognition. Chalamet starred as the lead in that coming-of-age romantic drama, along with Armie Hammer.

Chalamet is known to style himself for most events and premieres, dressing himself in some of the most eccentric and striking ensembles, particularly for his press tour for “Dune” and his Oscars outfit in which he went shirtless with a sequined suit by Louis Vuitton.

“Bones & All” had its world premiere on Friday during the festival and is scheduled for a theatrical release on Nov. 23.

The 79th edition of the festival is taking place until Sept. 10 and will debut some of the year’s most-anticipated films, such as the biographical drama on Marilyn Monroe “Blonde,” “The Whale,” “The Son,” “White Noise” and Olivia Wilde’s anticipated thriller, “Don’t Worry Darling,” which stars Harry Styles and Florence Pugh.