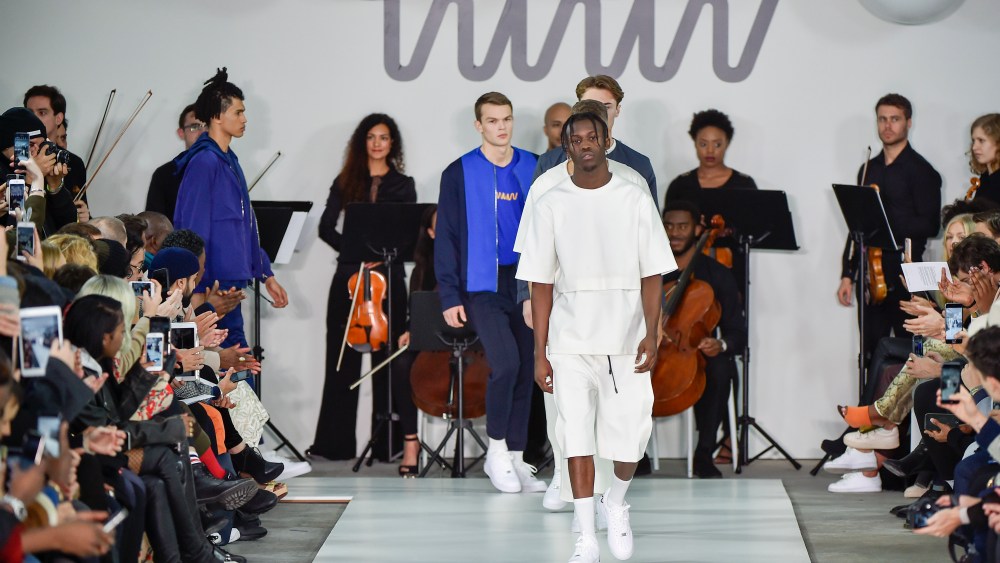 TINIE’S TIME: For the debut of his label, What We Wear, Tinie Tempah looked to the British capital and youth culture for inspiration. The 28-year-old musician staged a runway show held at the British Fashion Council Show Space on Saturday, where models walked as an orchestra played classical tunes.

“I’m here to try and introduce something that is here to stay and is long-lasting,” said Tempah. “And that doesn’t just appeal to men but it can also appeal to women. I don’t see why it can’t be for everybody.”

He describes his wearer as an everyday modern man and said the aesthetic of the label takes its cue from his own style. “It is a mix of the two,” said Tempah. “I definitely dress in young street wear kind of way – very high-end though. Now, I just want to wear my own stuff. My personal tastes go from vintage or high-street to expensive elaborate one-off pieces. But for me, the things I always cherish are the most simplistic things that last the longest and don’t necessarily have to be the most expensive.”

Tempah said his range will be sold at an accessible price point. “We’ve made it very much an essentials range with crew necks and jogging bottoms and T-shirts and shorts,” said Tempah. “I think it was a reasonable price point to start.”

The ath-leisure range hinges on basics such as T-shirts, sweatshirts, trousers and coats. Subtle details such as the brand’s logo are stitched along the sides of trousers or on white Nike sneakers. Tempah said pleats and snap button details are the brand’s signature. Pleating was prevalent on sweatshirts and tops while snap buttons ran down the legs of sporty trouser bottoms. The range came in neoprene, wool, jersey, cottons and nylon in a palette of midnight blue, gray, black and white.

Tempah said he has plans to design a line for women or unisex in the future.