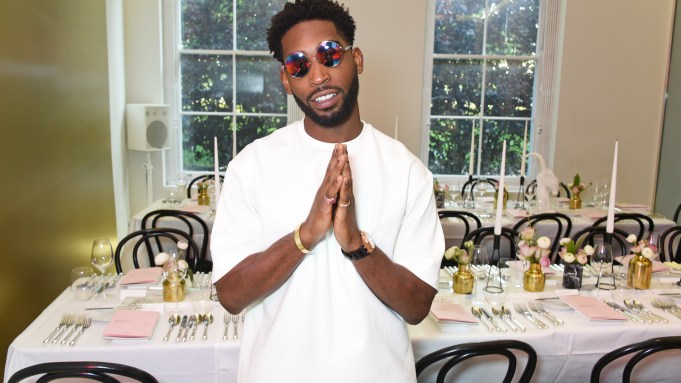 TINIE TIME: “We love you Tinie, and we love your house.” That was the consensus among guests at an intimate dinner hosted by musician and designer Tinie Tempah at his private residence in London, to mark the launch of Clos19.com, a new online retail platform for wines, spirits and Champagnes by Moët Hennessy.

“You should all just move in,” said the musician, who entertained guests with rap music by the DJ duo Audio Coming Soon and tapped his friend and Michelin star chef Tom Sellers to cook a meal that would accompany the vintage Dom Perignon served by Clos19.

“For me, this was just about being a good host. I love doing that within my own family, so I wanted to let you into my world to see how we do things,” he said. “It’s also about the idea of luxury. For a lot of my friends and I, luxury was something we aspired to, and it acted as a motivator, so sitting here after years of hard work, it sums up what life is about for me.”

Tempah also saw his work pay off earlier in the day, when his new label What We Wear sold out within 24 hours of its release online.

The brand, which made its debut at London Fashion Week Men’s last January, is gearing up for its second presentation in June and partnering with a series of other labels, including Converse, to produce collaboration collections. The team said they will also work toward increasing production in order to make the label more readily available to fans and avoid such quick sell-outs in the future.

Spearheaded by Stephanie Watine Arnault, the new business’ chief executive officer, Clos19 aims to celebrate the art of hosting by offering customers a guide to choosing the perfect bottle for every occasion and the knowledge on how to tell the story behind its label.

“At Moët Hennessy, we produce some of the finest wines, spirits and Champagnes, but unless you travel to the regions you cannot experience them properly. So the idea was to use digital technology to bring the experience to a wider audience,” said Watine Arnault, adding that the project has been 3 years in the making.

Her aim was to incorporate elements of music, art, food and travel to tell the story of Clos19.

“You always need music for entertainment, food to accompany the wine and the different types of cuisines also bring travel into the picture. So we wanted to host a series of different dinners that celebrate all the elements of the art of hosting,” said Watine Arnault.

In addition to Tinie Tempah, Watine Arnault also teamed with brand consultant Hikari Yokoyama and chef Jason Atherton who hosted dinners at a private resident and the Soane’s museum respectively, earlier this week. She is also planning to host another round of dinners which will explore the art of hosting in Germany, later this year.