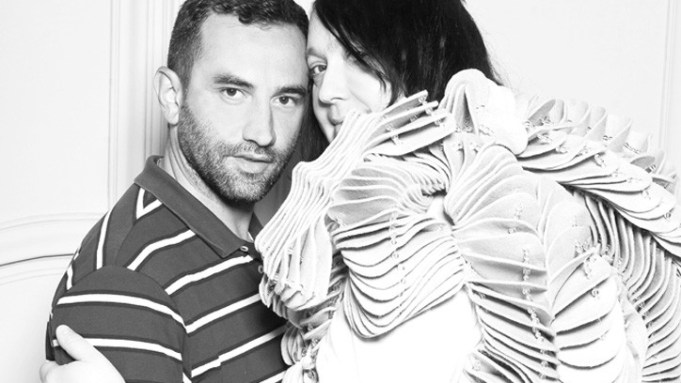 CAT’S MEOW: Marking his foray into gentlemen’s couture, Givenchy’s Riccardo Tisci has designed a bespoke ensemble for Antony and the Johnsons’ front man, Antony Hegarty, for his performance July 9 at Paris’ Salle Pleyel. The look artfully bends genders, however, featuring a “cat jacket,” constructed from sculpted rows of stacked felt panels that form a cat’s head on one shoulder, and a long dress in beige washed silk satin and matching wide pants. The jacket is said to have been inspired by Hegarty’s pet cat that had passed away just before his first meeting with Tisci. The look’s accessories include gloves and gold glitter shoes.

SHINING STAR: Michael Jackson is getting ready to sparkle. On July 13 the star will step onto London’s 02 arena stage to kick off his “This Is It” tour, clad head-to-toe in Crystallized Swarovski Elements. His array of costumes and sets will feature over 300,000 crystals to be exact, including 53 different shapes, 43 sizes and 27 colors.

“As the King of Pop, it is only natural for him to be crowned in crystal,” said Nadja Swarovski, vice president international communications for Swarovski.

MONCLER TO BOW: The Italian-owned outerwear brand Moncler will take over the Liberty of London store at 197 Sloane Street, according to industry sources in London. As reported earlier this week, an unnamed bidder approached Liberty principals, bought their lease and paid a $1.2 million cash premium for the 2,000-square-foot London store. Liberty will move out next month, although it is still unclear when Moncler will move in. A Moncler spokesman in Milan declined to comment. Private equity firm Carlyle Group holds a 48 percent stake in the hot brand that has worked in the past with Junya Watanabe, Nicholas Ghesquière and Fendi. Remo Ruffini, the company’s chairman, owns 38 percent, with the remainder held by other investors.

HIS AND HERS: Dutch fashion magazine Fantastic Man is spawning a female counterpart. At the Z Zegna show Tuesday, Fantastic’s editor in chief, Gert Jonkers, said The Gentlewoman will launch next year as a biannual title, with a similar people focus and an emphasis on “interesting stories.” Jonkers said coverage of women’s fashion would get “a preview” in Fantastic Man’s fall-winter issue, due out in September. Gentlewoman’s editor in chief has yet to be named.

SUNGLASSES AT NIGHT: Persol marked the opening of it’s “Incognito” exhibit at the Whitney in New York on Tuesday night with a bash that was anything but. A cast of bold facers including Liev Schreiber, Lucy Liu, Josh Lucas and Matt Dillon were on hand for the fete, which featured a lengthy, live performance by Lou Reed. Liu said she came because she’s a fan of Persol, even though she can’t count on its shades when ducking the paparazzi. “There’s not much you can do,” said the actress. “I change my location and my zip code.”

TREE WAY DESIGNS: A 23-foot giant metallic tree designed by Jean-Charles de Castelbajac will loom over Paris’ Palais Royal gardens beginning today. The piece, where a rainbow of fluorescent tubes act as branches and recycled paper represents leaves, was commissioned by utility provider Gaz de France to fete the switch from paper to electronic billing. Called “Noah’s Tree,” the installation will be auctioned off to benefit a children’s charity.

MUSIC JEANS: Move over, “American Idol.” Over the last few months, Diesel has been conducting a juried music competition of its own through its Diesel:U:Music online community. Starting July 3, the 2009 winners, indie bands The Terror Pigeon Dance Revolt and HeartsRevolution, begin their victory lap with a headlining concert in Berlin, the first stop on a 12-city Diesel-sponsored tour, with scheduled dates in New York, Tokyo, Paris, London and Miami. The two groups are following in the footsteps of “It” acts like Diplo (a 2004 winner) and The Fiery Furnaces (2006), for whom the honor — including the tour, music video production help and related online tie-ins — has proved instrumental in terms of building both fan bases and industry connections.

WRITE ON: Montblanc this month unveiled a special edition of its signature Meisterstück writing instrument that will help raise funds for UNICEF. The Signature for Good pens, which come in fountain and ballpoint models, retail from $385 to $690, with 10 percent of the price going to UNICEF’s literacy and schooling programs for children. The pens — which feature a deep blue sapphire to represent the U.N.’s signature color and a filigree gold-plated replica of the U.N.’s olive wreath logo — are available through May at Montblanc’s 33 U.S. boutiques, as well as more than 360 units overseas. Montblanc has raised more than $1 million for UNICEF since 2004 and aims to raise another $1.5 million over the next 12 months through a variety of initiatives.

SMALL STUFF: Lavinia Borromeo, married to Fiat heir John Elkann, will present her line of children’s wear, BLav, at trade show Pitti Bimbo in Florence this week. This time, Borromeo goes full force, following a small-scale introduction last season that was presented to retailers in Milan. Meanwhile, on Wednesday, Vanity Fair Italia hit newsstands with an eight-page photo shoot by François Halard of Borromeo, who is notoriously press shy, together with her husband and their two children, Oceano and Leone.