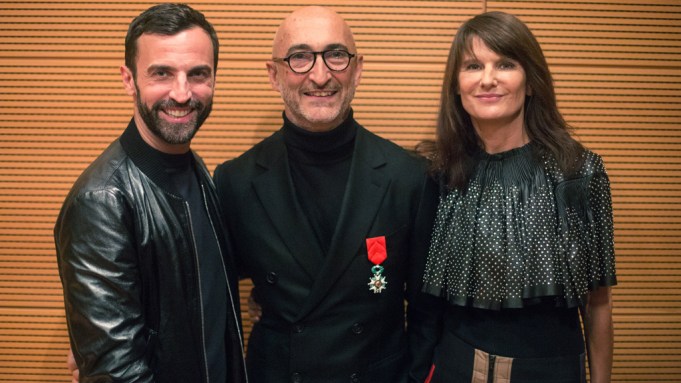 The designer was appointed Knight of the Legion of Honor by Pierre-Alexis Dumas, artistic director of Hermès International, at the house’s Paris headquarters on Tuesday.

Nicolas Ghesquière, Laure Hériard-Dubreuil, Jean-Pierre Blanc and Axel Dumas were among the dozen guests in attendance.

“He has been an unwavering support since when I started. He was there, way before everyone else,” said Ghesquière. “His longtime collaboration with Hermès and what he’s done with his own house is remarkable. He’s capable of both a great classicism — almost academic — and incredible fantasy.”

Pierre-Alexis Dumas paid tribute to the “teeming and tireless designer” whom his father, Jean-Louis Dumas, invited in 1990 to design women’s footwear for Hermès and who created his namesake label in 1999.

He described the “Quick” shoe model as “a worldwide hit” and the successful fine jewelry lines that Dumas senior offered Hardy to design in 2002, “taking [him] by surprise.”

“Sure, there were a few flops. I won’t dwell on the ‘Spoutnik,’ that despite its bold and visionary ambitions was a noteworthy commercial flop,” Dumas said, adding jokingly: “Since then, Spoutnik has become for us a noun to designate a singular object that doesn’t speak the same language as the clients it was nonetheless meant for.”

Dumas peppered his speech with countless tidbits about Hardy, a multihyphenate — a lover of Patti Smith and Chardonnay, and former dancer and Ecole Duperré teacher.

Hardy thanked the house he said allowed him to “create madly and luxuriously.”

He also named Blanc, director of the International Festival of Fashion and Photography in Hyères, “who entrusted to [him] the keys of his festival for five years [as its artistic director].”

“Everything is true [in Dumas’ speech], including the Chardonnay. I like white Burgundy wine,” Hardy told WWD after receiving the medal. He then turned to Dumas, praising his thorough research for his speech.

“How long did it take you?” he asked.

“A certain amount of time, but I have sources. I anointed you on behalf to the [French] state, so I felt strongly about it. I had fun writing it,” Dumas replied.

Everyone at the ceremony had a tale to tell about the Hardy, who worked on the recent Apple Watch Hermès.

“I was interning for P.R. Consulting working for Balenciaga and Pierre Hardy. That’s how I started in fashion,” said Heriard-Dubreuil.

“So Nicolas [Ghesquière] and Pierre are my mentors. After my internship, I pitched in on everything for Pierre including sales, and since I had the right foot size, shoe modeling,” continued the superstylish visionary behind Miami’s The Webster, towering in her Pierre Hardy boots from its pre-fall collection.

Now, she stocks the label’s creations at The Webster.

“Americans have a passion for him,” she said.

Earlier in the evening, Anna Cleveland, Jean-Jacques Picart, Dominique Issermann, Elie Top and Yaz Bukey were among the guests at an event at Colette to celebrate the launch of Betony Vernon’s Noble Knots collection with photographs by Olivier Zahm and the book-signing of photographer François Goizé.

Picart was among those who brought home an autographed copy of Goizé’s tome full of images from parties he took in the City of Light. Picart and Cleveland, whose images appear twice, also signed a copy that Goizé kept for posterity.