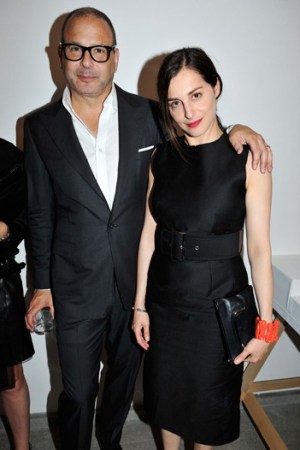 LEARNING TO REED: French actress Amira Casar, familiar with the best front rows of Paris Fashion Week, is finally getting a chance to impersonate a fashion designer. She has been cast to play the lead role in a stage version of “The Bitter Tears of Petra Von Kant,” based on the play and 1972 film by Rainer Werner Fassbinder. “It’s a love story between two women,” said Casar, wearing a strict black, sleeveless dress by Comme des Garcons that seemed to foreshadow her character. “I think she’s a very traditional woman with a lot of morals,” she said gravely. The play is slated to open next April at l’Athénée Théâtre Louis-Jouvet in Paris. Casar was among a youthful slice of Paris’ beau monde who piled into the Karsten Greve gallery Thursday night to meet American designer Reed Krakoff, who has set up a sales showroom in the gallery. He and energetic Krakoff president Valérie Hermann welcomed the likes of Olympia Le-Tan, Peter Copping, India Mahdavi and Harumi Klossowski de Rola, the daughter of the late French artist Balthus.