By Samantha Conti and Julia Neel on September 16, 2016
View Slideshow 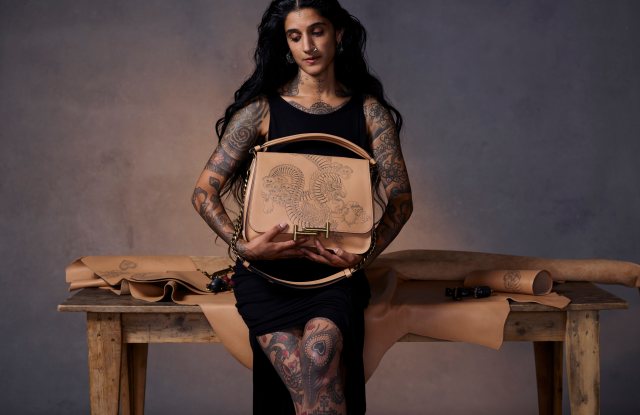 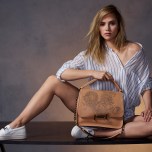 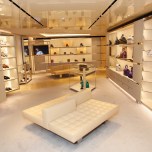 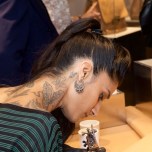 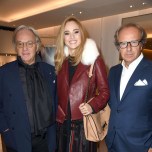 NEEDLE WORK: Tod’s and tattoos are rarely uttered in the same breath, but all that changed this week when Diego Della Valle moved the British needle artist Saira Hunjan onto the top floor of his Bond Street store.

Hunjan has been tattooing the brand’s large Double T bags, riffing on the brand’s signature lion and adding serpents, roses and hearts to create mythical creatures that wind their way across the front and back of the bags.

“Every bag has a different narrative,” said Hunjan, who spends about 22 hours tattooing each one.

Inking treated leather is not easy, and few brands have attempted it. “She’s working with the least-treated, most precious leather we have, because that works best,” said Della Valle, pointing to the caramel-colored hide on the workshop table.

The more a hide is treated, the more absorbent it becomes, which makes them tricky and messy to ink. Hunjan, who lives and works between London and South Wales, traces her designs on the leather a number of times, and repeatedly cleans it as she works, so that it doesn’t stain.

The generously-inked Hunjan said some parts of the process are similar to human tattooing. “I even use Vaseline to lubricate the skin to help the needle penetrate a bit more,” said the tattooist, who also appears in a short film — starring Suki Waterhouse — created to mark the collaboration.

On Friday at the store, Hunjan was working alongside Fabrizio Vita, a craftsman from the Tod’s factory near Ancona, Italy, who was patiently sealing the seams of bags with a small paint brush. “They’re from two different worlds — he’s from the middle of Italy, she’s from London — but they’re both specialized in hand craftsmanship,” Della Valle added.

The Double T bags are limited-edition, and will go on display in Tod’s stores worldwide. The company also plans to issue a more commercial version of the bags for resort. Those bags set to land in stores in December.

During an event at the newly refurbished Tod’s store on Thursday night, Waterhouse said she has no intention of getting a tattoo. “I just haven’t ever found anything that I wanted to tattoo on me,” she said. “I think my friend Cara [Delevingne]’s tattoo that’s on her foot — it says ‘Made in Britain’ — is pretty sexy.”

The model and actress also appears in the latest campaign for Tod’s, and said she’d spent much of her summer in Bristol, England, filming for “The White Princess,” a period drama for television in which she plays the corseted Princess Cecily of York. It’s due to air next year.