Fresh off showing his spring collection at Japan Fashion Week, Henry Holland is embarking on a four-week trip through Asia. 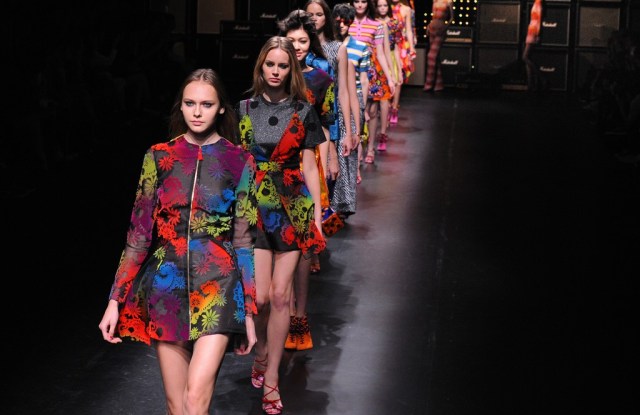 ON TOUR: Henry Holland is taking in Tokyo as part of a four-week trip through Asia. On Friday, the House of Holland designer staged a recap of his Seventies-inspired spring collection as part of Japan Fashion Week.

Holland is just kicking off a long journey that will take him to Singapore, Bangkok, Hong Kong, Sydney and Melbourne. At each stop, he is promoting his collaboration with Sanrio’s Mr. Men and Little Miss characters. The Japanese company based a blue-haired, bespectacled character called “Mr. Quiffy” on the designer’s image and Holland has designed a range of women’s and children’s apparel around it.

He’s also gearing up for the launch of his first men’s collection in January and pondering a Japanese-themed photo shoot for pre-fall.

“The men that drive the fish around rural Japan decorate their trucks,” said Holland. “They have chandeliers in the cab and they cover the outside with all of these modifications and lights, so I wanted to use one of those for the backdrop of my pre-fall shoot.”

More imminently, Holland is gearing up to visit Tokyo’s famed Robot Restaurant over the weekend. The hotspot, known for its elaborate floorshows involving bikini-clad women and machinery, is becoming a favorite destination for visiting designers.

Holland just might become a repeat customer. The designer will show in Tokyo again next season — DHL and IMG are sponsoring his two trips to Japan as part of a program to promote young designers.