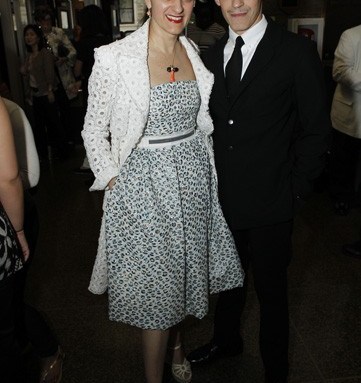 The couple, on hand to receive this year’s High School of Fashion Industries Advisory Board honor — presented by CNN’s Alina Cho — credited Fashion Calendar founder Ruth Finley for introducing them to the school.

“Ruth turned us on to the school.  I never knew about it. I wish I knew about [the school] when I was a kid, it’s such a gem to have this in New York City,” Ruben told WWD.

“Leave it to Ruth to introduce people to things, because she actually introduced us to what it was to be in the fashion industry,” Isabel, clad in an ivory lace coat of her own design, said. “She called us and said ‘You have to come to the school, I really want you to expose yourself to what this school does.’”

The school, founded in 1926, counts on the advisory board to bridge the gap between the fashion industry and the school through a myriad of partnerships and initiatives — including the industry mentoring program, a speaker series with guest lecturers and opportunities such as dressing the windows at Saks Fifth Avenue in their designs.

To celebrate the student collection, Ruben created a series of prints inspired by the work he saw at the school. “They showed me all the kids’ work and what they were doing and I was just inspired to create my version of [it],” he said. The pieces will be auctioned off on charitybuzz.com through June 14, with all proceeds going to the High School of Fashion Industries.