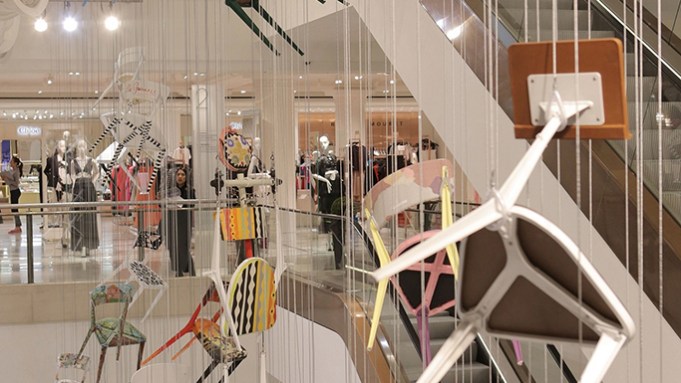 CHAIR-ITABLE CAUSE: Selfridges has collaborated with The Art Room, a charity supported by the Duchess of Cambridge, on a collection of 90 chairs by artists and designers including Tom Dixon, Paul Smith, Hervé Léger, Alice Temperley, Lulu Guinness, Charlotte Olympia, Hannah Weiland of Shrimps and Cara Delevingne.

Arts consultant Flora Fairbairn and her team gave each designer a chair to design – without a specific brief. “We approached at least 250 people,” said Fairbairn, co-founder of Fair & Co., an arts consultancy firm,  It was a very short time frame. I think we started in March. We gave them the chair, and then we told them to bear in mind that people will be looking up at the chair, so you gotta take that into account. It is really exciting to see the result because they are so varied, because obviously they are all the same chair.”

Produced and curated by Fair & Co., the chairs will be on show, suspended on wires in Selfridges’ central atrium, for six weeks. The items will be listed for auction starting May 22 through Paddle8, an online auctioneer. A live auction to take place at Selfridges on June 9.

In addition, Selfridges has created a pop-up art room in the Ultralounge, a dedicated window on Duke Street with pieces by Art Room students, all part of the retailer’s Work It! campaign.

The initiative will raise funds for The Art Room, which helps children by using art as therapy.