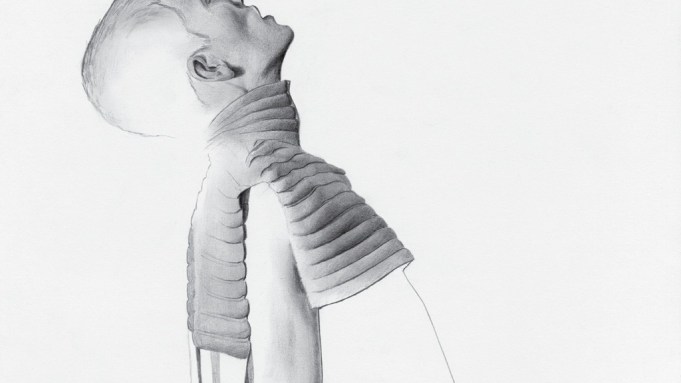 COSMOPOLITAN COCKTAIL: The opening of an exhibition of men’s wear illustrations by Richard Kilroy, called “The Cosmo Sketches,” was feted Wednesday night in Paris during a cocktail party held in the Tom Greyhound boutique.

The show, curated by A Magazine, includes works featuring model Cosmo MacDonald that were sketched from a series of live sessions in Kilroy’s East London studio.

“His cheekbones are amazing,” said the 28-year-old illustrator of his muse. “Very sharp!”

In the sketches, MacDonald sports a selection of fall pieces by designers whose spring collections are currently available in the Paris Tom Greyhound boutique — including J.W. Anderson, Christopher Kane, Maison Martin Margiela and Kris Van Assche.

“These are our top-selling designers at the moment when it comes to men’s wear,” said David Kang, general director of Handsome Paris, the local subsidiary of South Korea’s Handsome Corp., which is behind the Tom Greyhound concept.

The group is eyeing locations in New York and Los Angeles for a third door, after Seoul and Paris.

Kilroy, a tutor at Central Saint Martins, has a first book called “Menswear Illustration” due to be published by Thames & Hudson in the first quarter of 2015.

The illustrator said he is inspired by the spring 2015 collections, especially those from Craig Green and Walter Van Beirendonck.

“I need samples, though,” he said. “When I started, I used catwalk imagery, but for illustrations, I don’t want an angle that you have seen on the catwalk.”