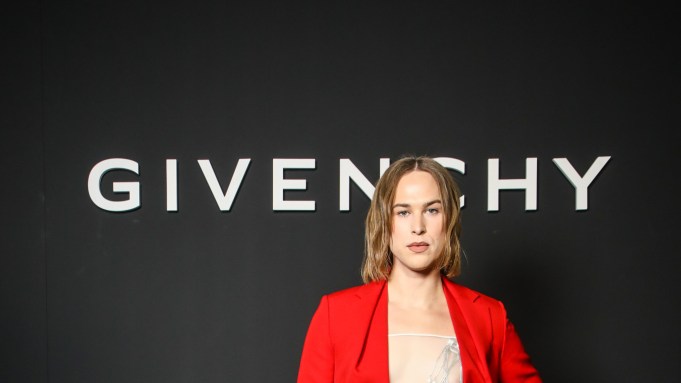 Tommy Dorfman is making the most of her first Paris Fashion Week since coming out as a trans woman.

“It’s been such a fun week to be back – as myself. I’m enjoying going to shows I’ve never gone to before, finally getting to explore different houses in Paris, and to try on different things,” she said. She has attended fashion week before, both in Paris and New York, but it is her first time back in the French capital since her announcement last July.

This week she has taken in the Balmain show (the actress also appears in the house’s summer campaign-slash-series), Loewe and Valentino. WWD caught up with her at the Givenchy show Sunday night.

Discussing the move toward genderless dressing that has appeared on several runways in recent seasons, Dorfman said she doesn’t believe it’s a trend. “I never really saw fashion in binary, it’s just a matter of expression. I think about history and men in tunics, men in skirts, men in dresses and to see that sort of re-translated to today is really exciting. It’s fun to be a part of all those things coming together,” she said, though she admitted she has “more of an affinity” for skirts and dresses now that she has transitioned.

Still, the “13 Reasons Why” star hit the Givenchy front row Sunday night in a ruby red pant ensemble. “I really wanted to wear a power suit. I wanted to feel that confidence and Matthew [Williams’] tailoring is so exceptional. I wore a suit of his a couple of weeks ago to an event and I felt so powerful and beautiful at the same time, so when I knew I was coming to the show I wanted to feel the same.”

Brooklyn Beckham blended in with the scrum of photographers, if only just for a second, snapping pics on his analogue camera. While many of his shots end up on Instagram now, asked if he is planning a follow up to 2017’s “What I See” book, he left it up in the air. “It’s just for fun, don’t know, we’ll see, we’ll see.” The student photographer praised the location. “I’m very honored to be here. It’s nice to be out again, and it looks gorgeous what they are doing with the set.”

Held at the modern Paris La Défense Arena on the outskirts of the city, models walked on a pristine white oval under a glowing white orb for a slightly alien feel. It was Williams’ first physical show for the house, after he filmed a presentation at the same location last season.

Kid Cudi, who also hung out at the Balmain blowout on Wednesday, and Offset, who hit up the Lanvin Sunday morning, rounded out the front row.